Ahead from its debut at the Geneva Motor Show, Renault has unveiled their new and exciting concept to the public.  This is dubbed as the Captur Concept where its own design theme was first shown at the DeZir concept.

Some of the most noteworthy features of this eye catching creation is its matt finished accents, a convertible hard roof, LED lighting units and an otherworldy massive 22 inch wheels.

The cabin is overflowing with state of the art gadgetry and makes you feel that it’s a piece of art fitted together inside a space age cruise ship! It offers a translucent dashboard, floating front seats, aluminum pedals and flushed with string accents.  Magali Gouraud Borgers is the designer of its interior and said that it was made to highlight the world of sailing or mountain climbing…well he might be right on the spot with this idea since the Captur has an aggressive SUV like appeal.

They installed right on the heart of this concept a dCi 160 twin turbo energy engine.  This is paired to an EDC dual clutch transmission.  The combination will allow the Captur Concept to sprint from 0-100 km/h in just 8.0 seconds an hit a top speed of 131 mph. 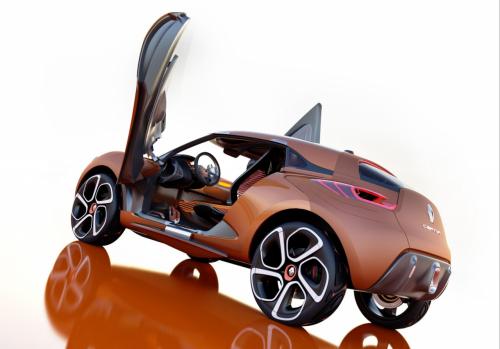 Ahead from its debut at the Geneva Motor Show, Renault has unveiled their new and exciting concept to the public.  This is dubbed as the Captur...