Red Bull is known for creating some of the world’s most outrageous stunts. After all, they’ve sent a man to the “Edge of space” and made him jump from there. He reached the speeds of more than 500 kph in a special suit designed for the jump attempt. Now, they called the hero – Felix Baumgartner, once again, but this time Felix isn’t going to the Edge of space. He will not go as fast because he will maneuver a helicopter and try to beat the Polish drifting ace Jakub Przygoński and his Toyota GT 86. Passion for flying helicopters got him to a point where he can maneuver with such precision he can compete with a drifting car.

In this absolutely insane video the aerobatic helicopter is trying to outrun the GT86 and even to go through the course faster than a specially prepared 1.000 HP Toyota GT86. Not that we are saying Red Bull consulted Ken Block on making this video, but isn’t it obvious that they are trying to capture the same drifting lunacy we are used to seeing in the Gymkhana series.
This is a story about precision, about ultimate coherence between a machine and a man and about dedication. The final moments of this video will leave you speechless. The courageous heroes on wheels and in air will prove once for all that they are a special breed of people who do not give up no matter what.
You may think that this is too similar to what Ken Block is doing in the Gymkhana, but the respect is huge for this one. Absolutely biblical.

Red Bull is known for creating some of the world's most outrageous stunts. After all, they’ve sent a man to the “Edge of space” and made him... 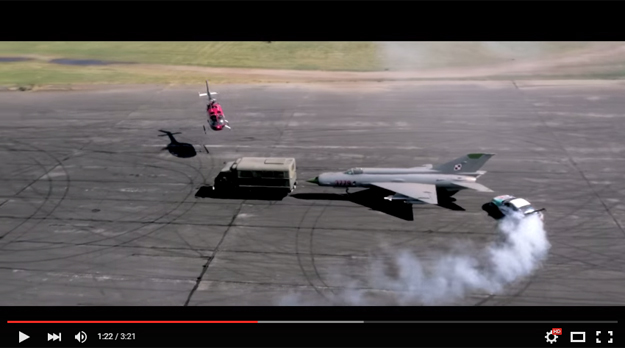