Every year, Bentley holds an event in Finland where they host a bunch of Bentley enthusiasts and gift them with a proper Bentley experience on the most amazing racing circuits on ice. However, Porsche does something similar and now we can see Range Rover going out on ice with their ultimate super SUVs.

Replicating the Silverstone track at the Lake Udjaur in Sweden, Range Rover made a wonderful proving ground for its most insane vehicle. Of course, the Range Rover Sport SVR was the one used for the ultimate time attack and sick testing on the track. The Land Rover Ambassador and a polar explorer Ben Saunders went near the Arctic Circle to explore the possibilities of the fastest car produced by Land Rover and in order to learn a thing or two about driving, Land Rover provided an instructor. And not just any instructor. Land Rover Experience Instructor and former rally champion, Minna Sillankorva was in the hot seat teaching Saunders how to drive on ice and how to use up all the power and resources the Range Rover Sport SVR disposes with.
And resources it has. The five liter V8 Supercharged engine (used for a multitude of Land Rover Jaguar cars) is capable of churning out 550hp and 502lb-ft of torque. A lot by any count. With it, this behemoth of an SUV is capable of hitting 60 mph in blistering 4,5 seconds on its way to the electronically limited top speed of 162 mph. Not that these numbers can be achieved on icy surfaces, but 550hp can do a lot even there. Especially in a car equipped with the Dynamic Active Rear Locking Differential which sends torque to the rear wheel with the most traction. So, yes, this is a blast of a drive and we would like to experience it.

Every year, Bentley holds an event in Finland where they host a bunch of Bentley enthusiasts and gift them with a proper Bentley experience on the... 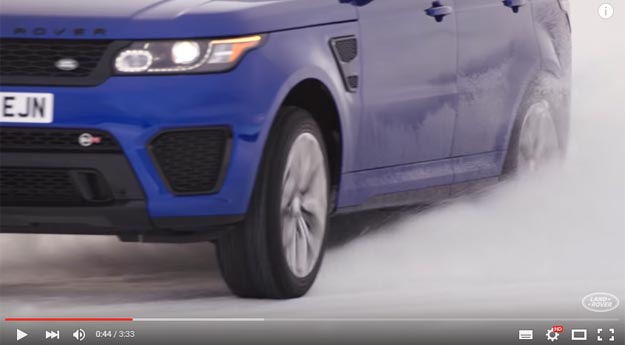