Only one place on Earth is long and straight enough for the Bugatti Veyron to achieve its maximum speed of more than 260 mph. That “place” is the Volkswagen private Test Track Ehra Lessien and that is the place where the magnificent Bugatti Veyron and even more magnificent Bugatti Veyron SuperSport achieved their top speed. However, these aren’t the only Volkswagen Group vehicles which can achieve miraculous speeds. A new kid is on the block and it is called the Porsche 918 Spyder. This car, however, isn’t quite as potent as the Veyron although it accelerates to speed as fast, if not faster than the Bugatti. Porsche wanted to test it out too, but the Ehra Lessien was somehow a bit too mainstream for the try.

So, the decision was made! Porsche had to find a long, almost deserted and unrestricted stretch of public road where they could test out their car. Really, as the Porsche 918 Spyder accelerates to 300 n 19.9 seconds we recon they could test it out anywhere on the Autobahn but they had to do something special with it. Special in Porsche dictionary is amazing in any other dictionary. Shipping the car to Alice Springs, Australia, they’ve hit the unrestricted roads of Northern Territory and the Porsche 918 Spyder excelled.
Acceleration is simply brutal. Some cloaked 2,4 seconds to 62 mph, but this is the first official video showing a 887 HP hypercar hitting its top speed of more than 217 mph. Astonishingly fast car is something of a testament to German engineering and it certainly shows that Porsche is magnificent enough and perfect enough to be considered one of the all time greatest. We know about its counterpart (here and here), but really, this is the one you should be after if you have $1 million to spend.

Only one place on Earth is long and straight enough for the Bugatti Veyron to achieve its maximum speed of more than 260 mph. That “place” is the... 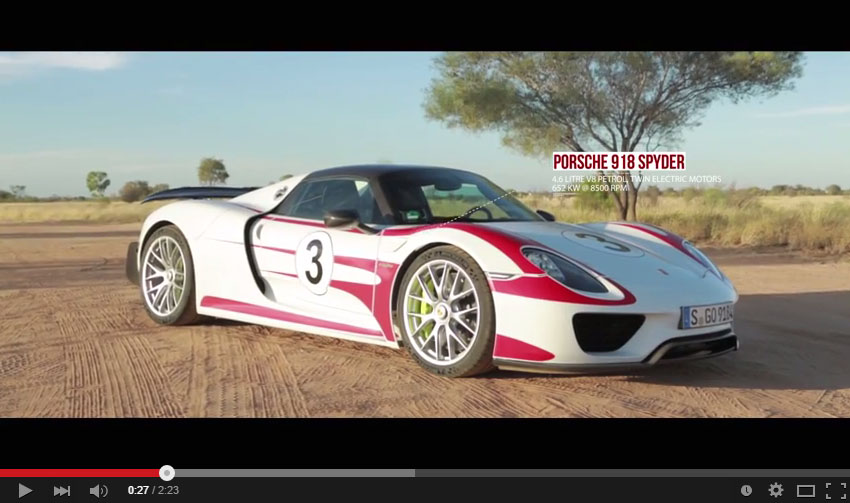