Porsche is heading to the way of E-power as they have unveiled their new powerful prototype named as the Porsche Boxster E. With new and upcoming creations of potent beasts powered by batteries, the Tesla Roadster becomes less and less interesting. This is still a prototype and still under development and testing.

They are still trying to test its drivability and user behavior but we may be able to see what’s to come out from their garage doors. This is still the same Porsche Boxter that we are used to see but it is now more eco friendly than ever. This car god have not confirmed that it will go into production in the coming years but with staggering numbers…every car freaks will surely give a thumbs up with the “E” version.

This sports car is powered by a 29 kWh battery that gives life to two electric motors. The power it breathes sums up to 245 PS or equivalent to 241 bhp.

Porsche is keeping their mouths shuts with the numbers that this prototype can achieve but gave a teaser that it is comparable to the Porsche Boxter S. This petrol powered beast can blast from 0-60 mph in 5.0 seconds and reach a top speed of 170 mph. 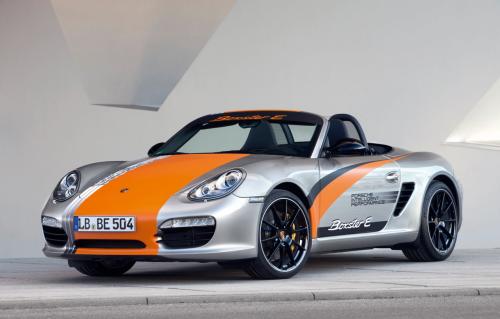 Porsche is heading to the way of E-power as they have unveiled their new powerful prototype named as the Porsche Boxster E. With new and upcoming...