The 2010 Paris Motor Show wouldn’t be complete without Porsche and what they have presented on this much awaited auto show is the Porsche 911 Speedster.  This little sports car still has the same egg like shape but to distinguish it from the rest of their line up, the 911 Speedster has a curvaceous windscreen and right behind the two headrest is a double bubble hardtop cover for its soft top.  This sports car is also lower by 60mm and wider on its rear by 44 mm.

This was built to pay homage to the first car that they produced to ever bore this name on its body-the 356 Speedster.  At the prestigious motor show, this sports car received a striking pure blue color which runs beautifully all over its interior.

The heart of the 911 Speedster is a 3.8 liter flat six engine delivering a monstrous 408 bhp which is 23 bhp more than the Porsche 911 Carrera S. Unique aerodynamic parts include a new set of side skirts, rear and front apron.  This will be available in Germany on the last month of this year. 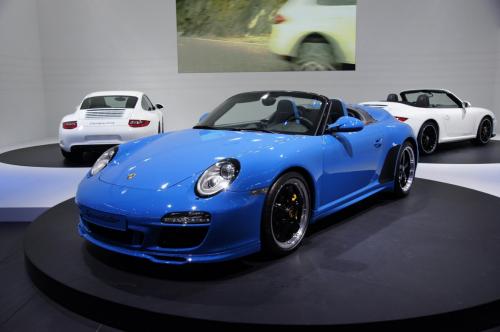 The 2010 Paris Motor Show wouldn’t be complete without Porsche and what they have presented on this much awaited auto show is the Porsche 911...