As soon as Honda announced that their newest Civic Type R is about to hit the streets speculation about the car started to emerge so furiously that it was obvious that many fans out there still deeply care for the magnificent car the Civic Type R once was. Then, at the Geneva Motor Show, after years of teasing us, Honda finally revealed their newest hot hatch with a vast array of technologies that finally overshadow the grumpy (and a bit silly) last gen Civic Type R and almost any other hot hatch currently in offer.

The video you see here shows the newest Honda Civic Type R pulling a lap at the Nurburgring where every modern sports car has to make a place for itself and it seems that the new Honda Civic Type R made the best of it. On the Nurburgring, only a few days before the official unveiling, the full spec car camouflaged with the well known white-and-black pattern smashed the ‘Ring covering 20 or so kilometers in 7 minutes and 50.63 seconds. Considering that the new Civic Type R is a front wheel drive car with a two liter four cylinder engine, this result is astonishing. To put things into perspective, this Honda you can see here finished the lap at the Nurburgring faster than the Mercedes Benz SL65 AMG Black Series and it was even faster than the BMW M5.
Despite all of that, 306 HP car should still be a pleasure to drive in the city and on the highway. Honda promises top performance in every aspect and the newest Honda Civic Type R might just be the best front wheel drive hatchback ever created. Honestly, we’d like to see a Ford Focus RS on that track too.

New Honda Civic Type R Is Faster Than Many Supercars

New Honda Civic Type R Is Faster Than Many Supercars

As soon as Honda announced that their newest Civic Type R is about to hit the streets speculation about the car started to emerge so furiously that... 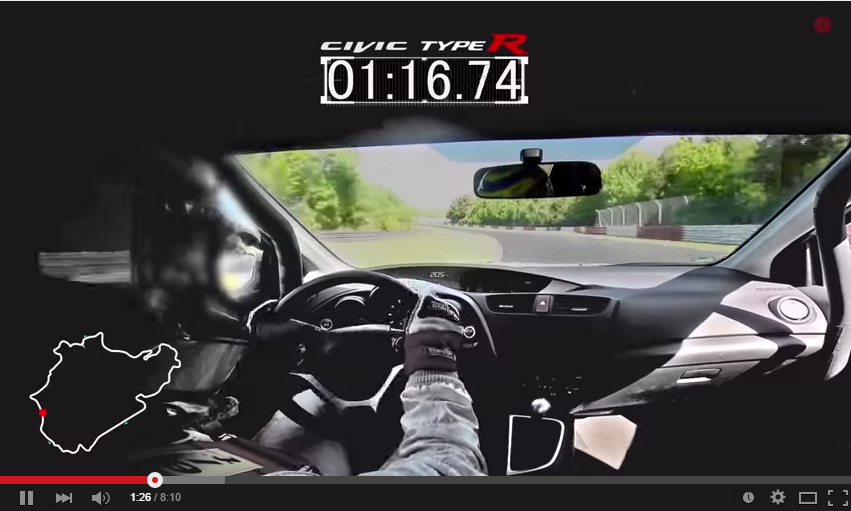