We know that NASCAR isn’t always interesting. Actually, looking cars thrashing down on the oval ring for hours at speeds close to 200 mph isn’t the kind of entertainment you could love all the way. However, sometimes, the drivers there really proved their knowledge by evading the crash happening in front of them. At the 2015 NASCAR Sprint Cup more than 10 cars were involved in a crash at 200 mph. Luckily, NASCAR is a rather well organized competition so the crashes often end up without any injuries and this one was not different.

However, science, incredible reaction of drivers and sheer luck are strong after this one. One man showed the ultimate skill while evading the cars crashing in front. Remember all of this started to happen at 200 mph which means that everything is happening extremely fast. Matt Kenseth and Danica Patrick, two drivers with rather impressive skills went around the all crashed car untouched and the just continued race. Actually, Danica Patrick really made the best effort here and overtook a bunch of vehicles without losing any speed.
This clearly sums up how tough is to ride in the NASCAR competition. The commentator makes a good point here. If the car goes sideways at 200 mph in front of ⅔ of all the cars on track this happens. Luckily, nothing too unfortunate happened and no one is hurt although the material damage isn’t small.

NASCAR Is Difficult Even Though You Can Be Bored With It

NASCAR Is Difficult Even Though You Can Be Bored With It

We know that NASCAR isn’t always interesting. Actually, looking cars thrashing down on the oval ring for hours at speeds close to 200 mph isn’t... 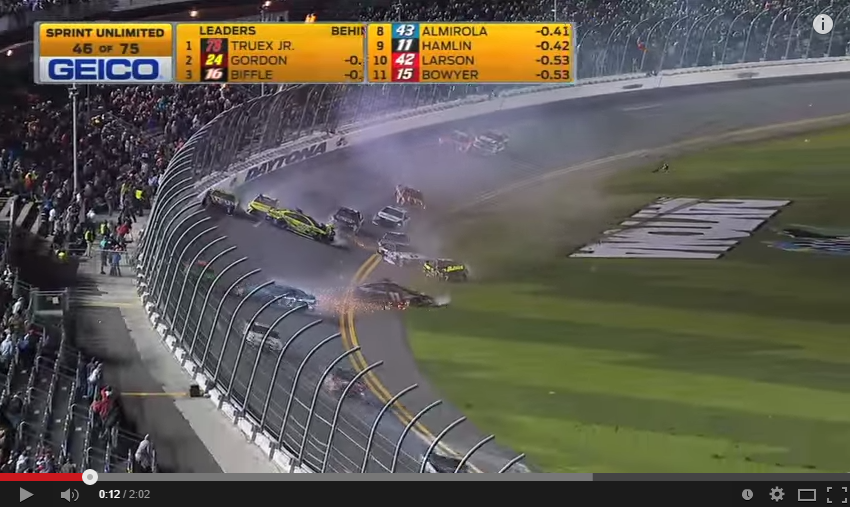