The Mercedes Benz SLR McLaren is back!  This exquisite car stopped production last year but they have announced that they will continue making this lovely beast on a limited number.  Only 25 units will be released and a sample of what they have to offer was shown at the Essen Motor Show.

The SLR McLaren is still stunning as ever but there are few noticeable changes that were done on its exterior.  The front fascia is modified and it also features a revised mesh grille with two large air intakes below its elegant headlights.  Side air vents are also installed completing the tweaks with a new rear diffuser.

McLaren is still keeping the specifications under their top secret folders but it is noted that this will still be powered by the same powerplant that the previous models had.   A 5.4 liter V8 engine capable of spitting 626 bhp of pure outrage with 575 lb ft of torque and can blast from 0-100 km/h (0-62 mp/h) in just 3.8 seconds until it reaches its top speed at 333 km/h.

This supercar is definitely still on top of the list with the range of numbers the McLaren SLR can achieve. 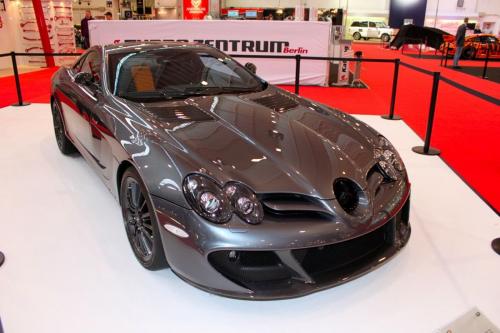 The Mercedes Benz SLR McLaren is back!  This exquisite car stopped production last year but they have announced that they will continue making this...