Wimmer RS has been around for quite some time mostly tuning high end cars. Their brilliant creations produce massive power and they make sure that they juice out every potential from the engine. This can be seen from the large jump of power output from their every creation. Their new beast that was unveiled recently was based from the Mercedes Benz C63 AMG and dubbed as the Full Force.”

The heart of this Merc is a 6.3 liter V8 engine that has been modified to produce staggering power. They installed a revised cylinder head, a high flow air filter, a new intake manifold, a sports camshaft and a stainless steel exhaust system. The altered engine can now produce a whopping 593 bhp with 531 lb ft of torque. This is a 142 bhp and 89 lb ft of torque jump from its stock performance. This is one respectable leap from its stock output top speed is now rated at 329 km/h.

There are still no detailed performance specifications of the Full Force and Wimmer RS is still keeping their mouth shut to what this car can do on the tracks. With the colossal power this car has, it will surely give speed freaks the numbers they dream of. 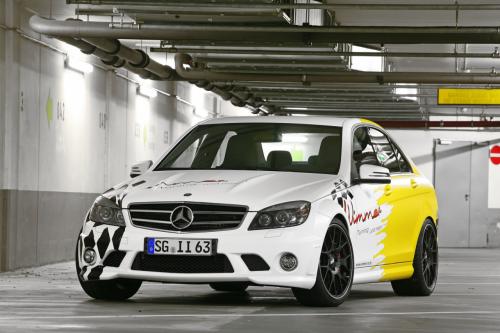 Wimmer RS has been around for quite some time mostly tuning high end cars. Their brilliant creations produce massive power and they make sure that...