Auto Shanghai Show, which will premiere on April 19th, will unveil another blissful piece of machinery and it’s the Mercedes Benz A Class Concept. Last month they have released a teaser sketch showing what true beauty they have made and these images were just astonishing. They have described their design concept as “Concentrated Dynamism” and with the magnificence of the A Class Concept this is definitely a preview of what’s to come in this car segment.

15 years ago the A class was just an ordinary, sluggish and boring mini MPV. But things have changed as Mercedes Benz is already at the forefront of giving a three door hatch some pure power and earlier leaks of an AMG powered A Class can now make sense.

This concept car is powered by a M270 based turbocharged 2.0 liter four cylinder petrol engine. This commanding powerplant is mated to a dual clutch transmission that gives life to its front wheels. Total power output achieved is a staggering 208 bhp and its more than enough to have this hatchback be on top of its class.

Other highlights of this A Class Concept are the Merc’s BlueEFFICIENCY package, high performance LED headlamps, adaptive brake assist and a radar based collision warning system. 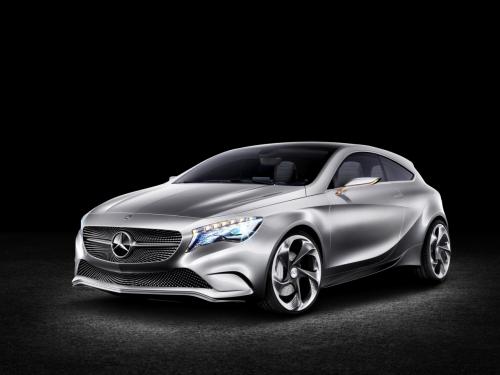 Auto Shanghai Show, which will premiere on April 19th, will unveil another blissful piece of machinery and it’s the Mercedes Benz A Class Concept....