After releasing the McLaren P1 GTR, the McLaren 650S Project Kilo and the McLaren 675LT, the British based manufacturer of exclusive vehicles prepared something really special. By unveiling the new car at the New York Auto Show, McLaren finally entered the segment of cars such as the Porsche 911 Turbo (and Turbo S), the Mercedes AMG GT and the Jaguar F-Type R.
The new car is called the McLaren 570S and as you can deduce 570 basically means the power of the engine in the car. And, no, you are not wrong. McLaren really did detune their only 3.8 liter engine which they have been using for quite some time now. However, the engine used for the 570S is not only detuned, it is reengineered and McLaren states that they’ve integrated over 30 percent new parts in it. If we go back a bit, you may recall that this engine developed 612 HP in the MP4-12C car. Now, they are using it for every car in their lineup. Now, even though the 570S is the least powerful new generation McLaren, its tech and modern construction really add up the flair and excitement which makes it very, very interesting for every petrolhead.

As expected, the car features a monocoque chassis made from carbon fiber, its looks clearly draw inspiration from other McLaren cars of today (which is nice) and thanks to the weight saving measures the car tips the scales at only 2.895 lbs. That is an impressive number considering that the car is a direct counterpart to the 911 Turbo which is much heavier.
Employing a seven speed SSG transmission, launch control probably sourced from the previous McLaren cars and Pirelli P Zero Corsa tires, the thing can accelerate to 62 in 3,2 seconds and it will eventually hit 204 mph.
The video McLaren released in order to promote the new 570S Coupe shows the car in a wind tunnel. However, by showing us a black swan thundering there, it is clear that they are saying they’ve developed a gracious car that uses the best of everything.
“Black swan – symbol of something so improbable, so unlikely, that it is deem impossible… until one comes along” says the narrator in this magnificent video and this sentence really sums up what this car is all about. 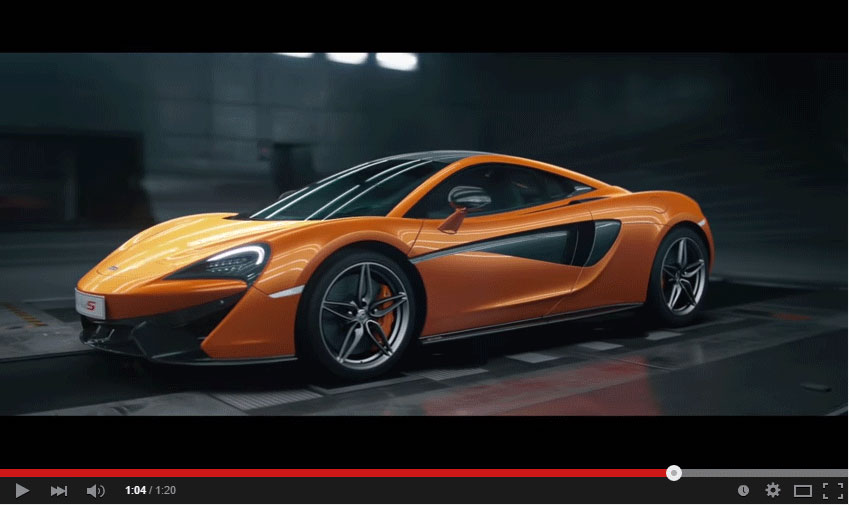