Finally it has come to life! After 5 years of constant modifications, McLaren will now put into production the much awaited McLaren MP4-12C. This was formerly known as the P11 which debuted at the Goodwood Festival of Speed. Following numerous presentations, it will now be unleashed from their garage doors to give madness on the roads.

McLaren’s Automotive Managing Director said that their masterpiece has evolved from a concept car to a high performance sports car. This was developed from their very own Formula 1 simulator. This will be built in their technology centre located at Woking, England. The McLaren MP4-12C is slated to 1,000 units for 2011.

The heart of this beast is a twin turbo 3.8 liter V8 engine connected to a seven speed double clutch transmission featuring a “Seamless Shift” technology. This brings the MP4-12C to a roaring 600 bhp with an astonishing 442 lb ft of torque. It allows this sports car to detonate from 0-100 km/h in just 3.8 seconds and gives it a top speed of 300 km/h or equivalent to 186 mph.

Price tag is set at $229,000. With its exclusivity you are definitely sure that this monster comes with a soaring cost. 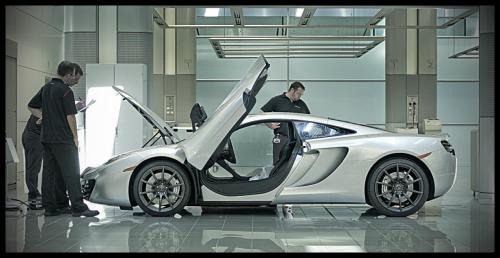 Finally it has come to life! After 5 years of constant modifications, McLaren will now put into production the much awaited McLaren MP4-12C. This was...