The Mercedes G63 AMG 6×6 was and probably is one of the maddest and baddest off road vehicles that were ever produced. It showed that the Germans can be humorous as well and the level of lunacy on it is high. That was not oversighted by the rich sheiks who come in hundreds to buy it. However, there was a catch. Mercedes Benz said that they’ll only produce 30 of them. Of course, mighty dollar changed all of that, so Mercedes produced about 100 units in a year or so. Now, when the production is finished, Mercedes has to offer an ultimate successor and here it is. Press play to see how the mighty Mercedes G500 4×42 goes out from its den in front of which is greeted by a wonderful wild cat.

This mighty Mercedes received the suspension of the G63 6×6. With 22 inch wheels, impressive complement of off road weapon and impeccable German built machinery, the Mercedes G500 4×42 has a fording depth of 1.000 millimeters, its approach and departure angle are 52° and 54° respectively which is simply astonishing.
No wonder it can take on the roads like these in the video. Moreover, the G5004x42is powered by a sports car engine. four liter V8 with two turbochargers develop 422 HP and yes this is an engine sourced from the AMG GT. The car is still in its concept version and Mercedes said that they will listen the reactions of the visitors of the Geneva Motor Show so we can be already sure that they’ll produce it, because, who doesn’t like it.

The Mercedes G63 AMG 6x6 was and probably is one of the maddest and baddest off road vehicles that were ever produced. It showed that the Germans can... 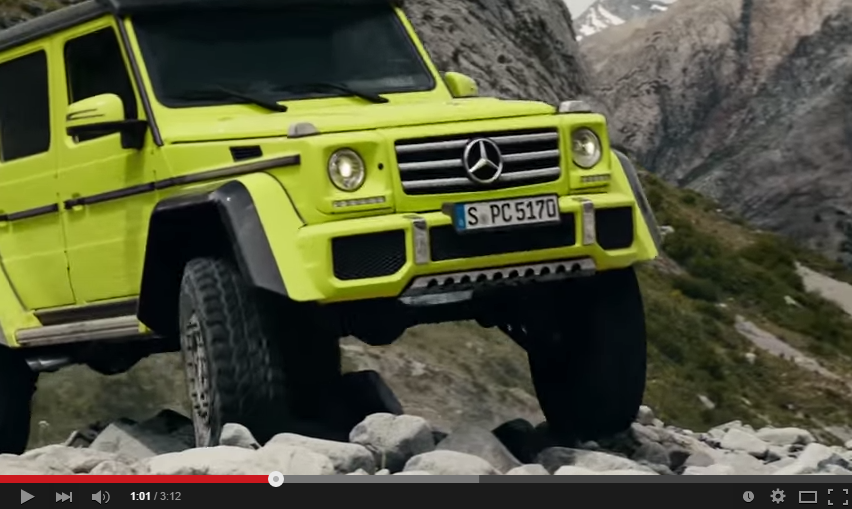