Wald International is one of Japan’s top tuners for high end cars. They just released one magnificent creation out of the Toyota 200 Land Cruiser and after releasing this beast they immediately received tons of requests to also have their expertise be done with the Lexus LX570. The Japanese market doesn’t actually have this model but that didn’t stop Wald International as they have shipped one from the U.S. and made one staggering monster.

They have christened this as the LX570 Sports Line Black Bison Edition. With the Japanese at the forefront of reliability, you are sure to get the same treatment with this masterpiece. This Lexus was given a more aggressive stance and features a full body kit. The sleek styled front bumper also received LED daytime running lights.

This car tuner developed a specially designed exhaust system and available for the 5.7 liter version since the Japanese Land Cruiser version is available only in 4.6 or 4.7 liter.

This stands on a beautiful MAHORA M13 24 inch in black alumite or black polish. This is Wald’s signature wheels and they are massive complementing the SUV’s gorgeous design. Delivery is also set with the Sports Line Black Bison. Specs to the car’s performance are still limited yet we expect nothing but greatness! 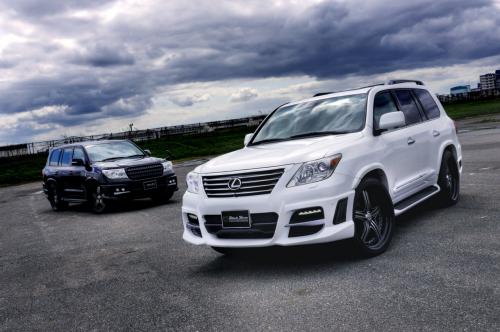 Wald International is one of Japan’s top tuners for high end cars. They just released one magnificent creation out of the Toyota 200 Land Cruiser...