“There is no such thing as impossible, it’s just a matter of figuring out how” are the words that hit you in the face at the start of the video which depicts the new Lexus hoverboard. It is real, it exists and you can see it in this video in its full glory. After the release of the movie Back To The Future II the whole world of high tech aficionados started brainstorming and figuring out how to create the best movie prop they’ve seen in decades – the hoverboard. It is quite astonishing how people react to a new form of personal transportation. The world stood in amazement waiting for scientists that will bust or confirm the possibilities of creating such a device. It never before hit the market and that really is enough to show you how hard it is to make the hoverboard possible.

All of you who remember the movie know that the future is set in 2015 – now and today. Do we have hoverboards!? Thanks to Lexus yes, we have it. Lexus engineers went mad in creating the famous hoverboard. The technology for it has been around for quite some time now, but no one gave it as much thought as Lexus engineers who developed a working unit by integrating two superconductors cooled at -197 degrees in the board. In order to achieve superconductivity, the elements inside the board have to be cooled at a temperature which required the addition of liquid nitrogen to the special reservoirs in the hoverboard every ten minutes. The next thing they had to do is create a magnetic field over the track. They’ve done it by placing powerful magnets under the track. Thus the superconductivity material easily interacted with the magnetic field and enabled the board to hover. Of course, if you want to know all the science behind it, just google it.
All in all, the board can obviously support the weight of an adult and if you are really good at skateboarding then you may actually be able to ride this thing. The track is located in Barcelona and it is around 600 ft long. It is hard to manage the hoverboard as it can only go over the magnetic field underneath. Obviously, we will not see this thing in action in the Lexus showrooms any time soon, but the Japanese proved that the hoverboard predictions for 2015 weren’t only gibberish.

“There is no such thing as impossible, it’s just a matter of figuring out how” are the words that hit you in the face at the start of the video... 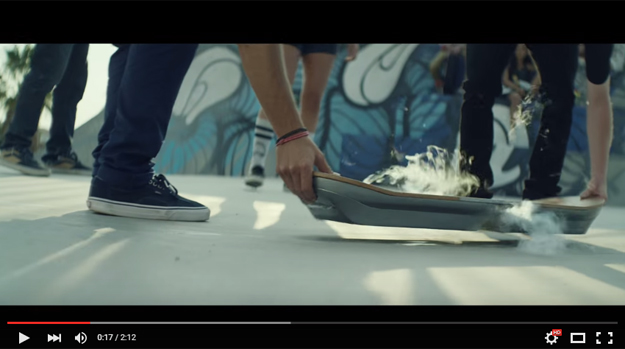