James May had his thing with Lego. He was so persistent and stubborn that he, with the help of the team behind the scenes, built a whole house (a large house) and lived there for quite a bit. Actually, follow this link and you’ll see what are we talking about.

If someone succeeded in creating a whole house using Lego then a scale version of a car shouldn’t be that hard, should it!? Watch professional Lego “operators” create a magnificent scale version of the Ferrari F40 (arguably the best supercar ever) with an almost unimaginable level of details. The guy who made the car is called Mike and he is a designer for Lego Creator. He did make some outrageous things back in the time, but with the Ferrari F40 he pushed the envelope a bit further. 10 inches long, 3 inches high and 5 inches wide, the Lego Ferrari F40 is a testament to human creativity. The details on this Lego build are amazing and the designer Mike even incorporated the engine at the back, he succeeded in creating pop up headlights, the interior with a wheel, the seats and original colouring and the rear engine cover through which you can actually see the engine.
In order to produce an almost exact replica, Lego creators worked closely with Ferrari and Lego had to produce a number of new parts to make this possible. Actually, they only had to produce eight new elements, which shows that Lego already has a vast amount of elements that make it possible to build almost anything.

James May had his thing with Lego. He was so persistent and stubborn that he, with the help of the team behind the scenes, built a whole house (a... 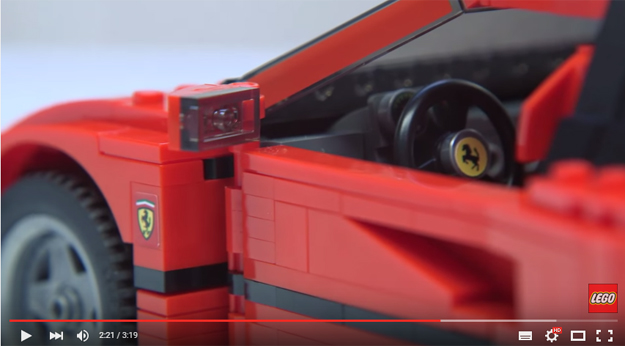