The KTM X-Bow is in a totally different class.  Its exquisiteness is still incomparable and can only be identified with a few other race track cars like the Lotus 2 eleven or the infamous Ariel Atom.  Having the X-Bow back with a better and meaner performance is just mind blowing.  This car is already colossal in its totality whether you look at it visually or look at its numbers on the tracks…it is just brilliant.

KTM is still developing a new breed of the X-Bow and when you try to put an “R” and stick it to its name, this will just mean an angrier version of the stock car.  So right now our hopes are still high to see the 2011 KTM X-Bow R.

It is said that two options are being prepped up to customers; a street legal “Sport” package or a “Race” package which is built only to dwell in the tracks.

The new roadster is also set to have a powerplant upgrade that will let it generate 300 bhp.  This is surely a large jump considering the standard X-Bow’s stock performance of 237 bhp.  The engine will still be coming from Audi but they will be using a powerplant from a more powerful beast, this is the same heart that the Audi S3 Sports hatch is using and can realistically reach those proposed numbers. 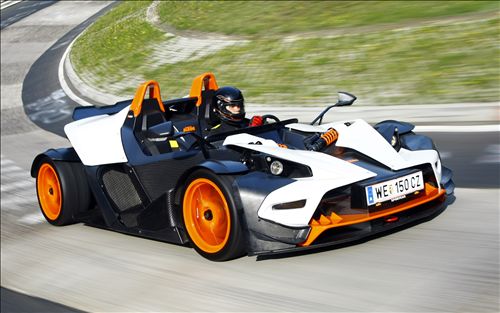 The KTM X-Bow is in a totally different class.  Its exquisiteness is still incomparable and can only be identified with a few other race track cars...