JE Design has introduced their new creation from the Volkswagen Touareg.  This SUV is known for its astounding performance and winning 2 Dakar Rally Challenges.  JE Design did not make the Touareg look like a rally car but made it more of a sleek styled street cruiser packed with a wide body kit and they unleashed the power hidden under its hood.

The body kit includes a new front spoiler with a modified grill, a rear inserted apron, dual exhaust system and drawn out wheel arches giving that “wide body” look.  The Touareg also received 22 inch aluminum wheels which are connected to lowering suspensions that reduce the height by 35 mm.

The 4.2 liter TDI engine received an ECU upgrade and from the stock 335 bhp with 590 lb ft of torque it now breathes a powerful 404 bhp with a monstrous 686 lb ft of torque.  This SUV can run, at least like a sports car, because it blasts 0-100 km/h in just 5.4 seconds and reach a top speed of 269 km/h.  That is one astonishing performance considering the weight this engine needs to carry.

JE Design still proves that they are not just a tuning company that plays good looks on cars but they are also capable of bringing out the best performance out of their little monsters. 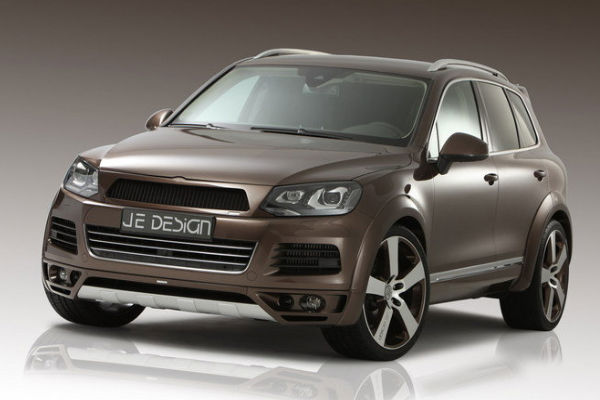 JE Design has introduced their new creation from the Volkswagen Touareg.  This SUV is known for its astounding performance and winning 2 Dakar Rally...