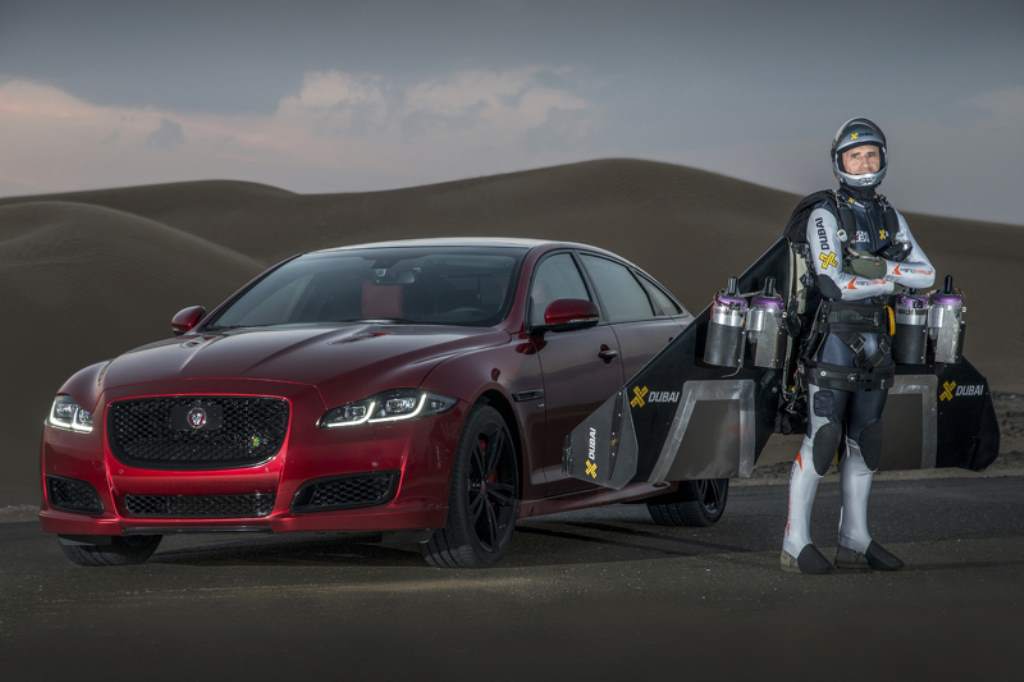 Ok, we all know Dubai is a rather peculiar place. The buildings are high, the cars are fast and the people living there are rich. That is also a place of wonders as some of the craziest stunts imagined are performed in there. One of the most amazing stunts was done by a jet man – a guy with a freaking jet-powered wing on his back who flies with speeds of up to 186 mph. Yes, he is the real life equivalent of James Bond or some super hero- it is then incredible.

Now, Jaguar wanted a piece of this interesting and sweet pie. They went to Dubai, took one of their most praised creations – the XJR and put it in a race against the JetMan. Why? No one actually knows, but this feat looked spectacular. Filming all the show, the driver in the XJR (not just any driver but Martin Brundle) had to take off from the line and cross the finish mark before the Jetman on the property of Yves Rossy. The 1.75-mile race in Dubai desert kicked off and while Brundle enjoyed a serene interior full of leather and gadgets, the JetMan flew with six and a half feet wide wing strapped to his back. Powered by four Jet-Cat engines, this rig is capable of incredible things. Brundle topped at 174 mph while the Jetman went all the way to 195 mph and won the race.
Interestingly enough, the Jetman rig can be launched only from a helicopter and not from the ground. Sometime in the future, Yves Rossy plans to build a wing capable of lifting directly from the ground and flying more than 10 minutes at a time.

Jaguar Just Raced Its 550hp XJR With A Jetman In Dubai

Jaguar Just Raced Its 550hp XJR With A Jetman In Dubai

Ok, we all know Dubai is a rather peculiar place. The buildings are high, the cars are fast and the people living there are rich. That is also a...