The Nissan 370Z is a nice car. Although it does not bring all the Z goodies we wanted to see before, it can inject some excitement and get you to like Nissan ever so slightly more. However, some find its 3,7 litre naturally aspirated engine far too weak for any proper use. In that case, the turbocharger can help, or a swap. Here, we bring you the latter.

We would actually dig the LS swap, but these guys from the US just went all the way berserk with it. The engine inside was replaced with a unit taken from the NASCAR racer. The V6 has been thrown out and the 800hp engine used by cars which can go over 200 mph for hours has been inserted under the hood!?
Normal? Do not think so! With so much power under the right foot, this NASCAR powered machine is capable of delivering a serious drift blow to anyone trying to compete with it. With insane steering wheel angle, the mighty Nissan 370Z makes drifting as easy as it gets. With the Dodge Nascar Penske V8 engine inside, it has no problems in turning the wheels more than it should at any point. This footage was actually shot at the Australian Drifting Grand Prix [ ADGP ] Calder Park, Australia. It would be nice to see how this monstrosity, which clearly enjoys the drifting scene, can compete with the likes of the Lexus LFA racer and the Lamborghini Murcielago racer. Both of these cars are powerful enough to give the 370Z a run for its money. Yet, not one of them has a freaking NASCAR engine inside. Sick.

Is This Nissan 370Z With NASCAR Engine The Ultimate Drifter

Is This Nissan 370Z With NASCAR Engine The Ultimate Drifter

The Nissan 370Z is a nice car. Although it does not bring all the Z goodies we wanted to see before, it can inject some excitement and get you to... 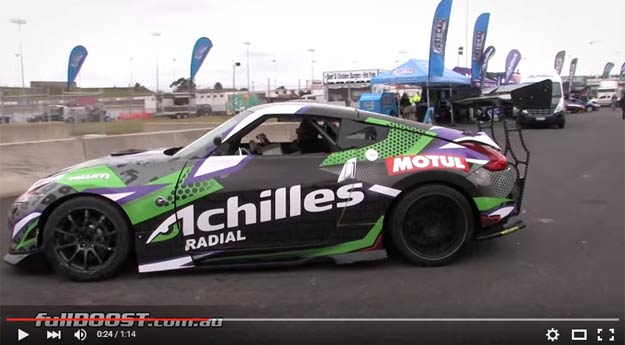