Every gearhead in the world wondered who makes the best cars out there. And now, when basically every car is made to comfort every need a human could have, it is hard to decide. At these times the only real way to see who’s who and who’s the best in the business is to compare the best they can offer. Car Magazine had that idea so the’ve gathered up two of Europe’s most wanted – the BMW i8 and the new Lamborghini Huracan and two of Americas most wanted – the 2015 Ford Mustang and the exceptionally ludacris Dodge Challenger SRT Hellcat.

Now, both Mustang and Challenger will reach hundreds of thousand of customers, while the Beemer and the Lambo will grace the garages of the really wealthy ones. The short review here really covers all the basics and it literally says that the Americans build a magnificent low cost sports cars, which, of course lacks the high-tech feel and mental sci fi propulsion systems other two cars have.
We have to point out the this comparison doesn’t go in depth, but it shows that the Mustang (which is the cheapest) is the slowest of the lot. The Lambo is of course the fastest (and the costliest), but it is nice to see that the i8 can kick some muscle car butt with its three cylinder engine. It is much faster than the Mustang 5.0, but it simply cannot compete with the mental Hellcat. As a reminder we will just say that the Lambo has an engine developing 610 HP, the Challenger Hellcat is powered by a 707 HP engine, the Mustang has 500 or so HPs while the Beemer disposes with 360 or so HPs. None of these are slow and if you like any of them, go for it.

Every gearhead in the world wondered who makes the best cars out there. And now, when basically every car is made to comfort every need a human could... 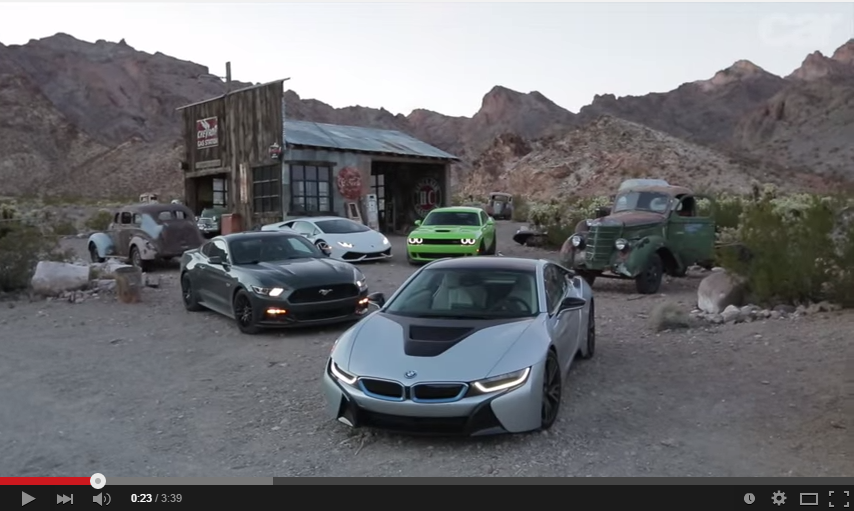