It takes around 300 – 400 milliseconds for an average human to blink to blink their eye. On the other hand, the average speed of the airbag deployment from the time of impact to full inflated shape takes only 80 milliseconds. Some seriously powerful stuff is in these airbags. Really, explosive is the only system fast enough to inflate an airbag in no time. The explosive is found in every airbag in the world and after the sensors sense that a crash happened, the ECU triggers an electric impulse which lits the explosive. So, playing with it should and could be dangerous, but that didn’t stop some backyard scientists (or idiots to be more precise) in trying out the devastating power of the airbag. They’ve even launched a wheel using one.

What happened next is quite logical. The wheel dropped where it shouldn’t- on top of the car and it broke the rear windshield and a part of the roof. Not only is this kind of behavior strictly forbidden, but you could be prosecuted by authorities for carrying out “dangerous experiments” if you try something similar.
All in all, this is what happens when you don’t do your math and trigonometry right. The wheel could have easily landed on someone’s head which wouldn’t be cool at all. Imagine the implications. Playing with airbags is definitely a dangerous endeavor, so don’t.

It takes around 300 – 400 milliseconds for an average human to blink to blink their eye. On the other hand, the average speed of the airbag... 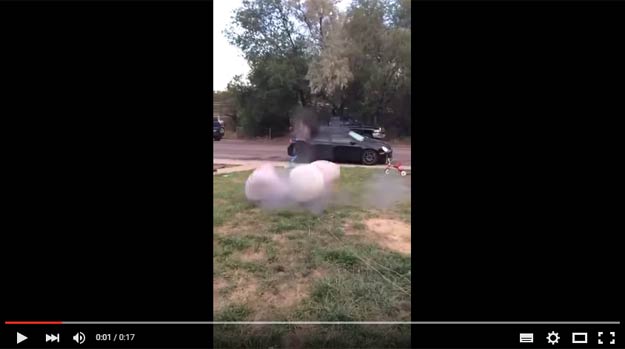