The 2011 Seoul Motor Show had some interesting creations and Hyundai was one of them. This is a concept masterpiece named as the Blue 2 code named as HDN-6. It is actually a hydrogen fuel cell powered car and this is Hyundai’s attempt to be at the forefront of the competition in making a reliable hydrogen-electric powered vehicle.

The design has a real futuristic approach as the side mirrors are replaced with rear view cameras and it also features an automatic door opening system. It has easy access to both inside and outside of the cabin and has installed at the center console a transparent organic LED monitor. A wheel and sensor named as the “Motion Sensor Moustick” was also used to create a new way of easily accessing its infotainment system.

Giving life to its electric motors is a 90 kW fuel cell that gives 121 bhp and helps on its fuel economy of achieving a 34.9 km/liter. To further improve its petrol consumption they fitted the Blue 2 with low roll resistance tires with lightweight alloy wheels.

The name Blue 2 was derived from Hyundai’s Blue Drive combined with the symbol of hydrogen which is H2. This is a concept car which also an aggressive stance coupled with top notch technology. 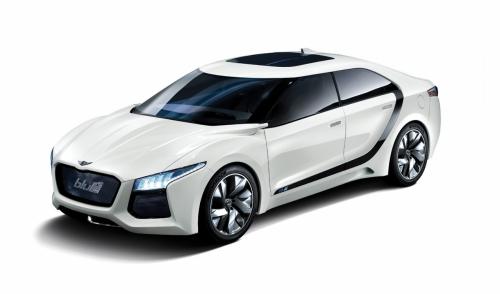 The 2011 Seoul Motor Show had some interesting creations and Hyundai was one of them. This is a concept masterpiece named as the Blue 2 code named as...