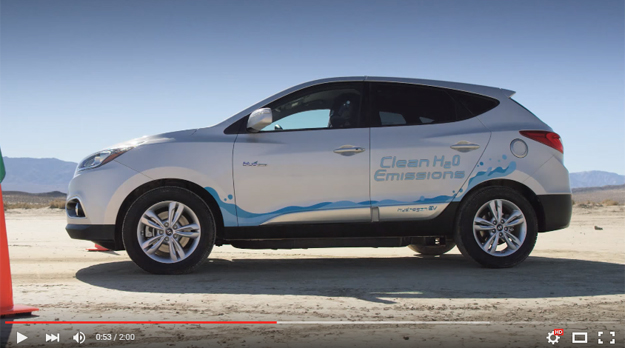 Did you know that Hyundai sells Fuel cell cars powered by hydrogen? Yes, you can buy them right now for a $499-month lease and $2.999 down payment. True, you can do this only in southern parts of California because that is the only place you’ll be able to drive as some rudimentary hydrogen infrastructure actually exist there. Hyundai converted an old gen Tucson to Fuel Cell drive a few year ago and they have sold a number of them there (with every buyer also getting a life worth of hydrogen supply – basically free driving), but now the most important news about it is something we did not expect.

The Hyundai Tucson Fuel Cell just broke the world speed record and became, get this – the world’s fastest hydrogen-powered crossover. Well, it seems a bit dull to compete in this segment and try to make hype about something that is actually not that impressive. This is like saying that the Moon is the best natural satellite of the Earth. Well, of course, it is – it is the only one!
Nevertheless, there are some other fuel cell powered crossovers, but none of them actually tried to set the land speed record and if we are to judge by the results the Tucson achieved we are quite sure they other cars would easily take over the crown of the fastest crossover. The Tucson cloaked the speed of 94.6 mph which is not a lot, but we have to be honest here – Hyundai made a bold step and revealed a fully working and rather nice Fuel Cell car before anyone else. They sold around 100 units in California all of which cloaked more than 841,418 miles and that is a lot for fuel cell cars. Now, we expect something beautiful to spruce from this – maybe a mass produced affordable Hyundai Fuel Cell car with free hydrogen. Now, that would be a revolution like no other. Of course, that is not possible yet since the infrastructure simply does not exist.

Did you know that Hyundai sells Fuel cell cars powered by hydrogen? Yes, you can buy them right now for a $499-month lease and $2.999 down payment....