Rally Sweden is one of the most exciting driving events in the car world. Last week, the best rally drivers from all over the world took the chance there and the Volkswagen team finished first. However, one astonishing feat has been accomplished by the Hyundai WRC team who finished second. Thierry Neuville driving his expensive and impeccable Hyundai i20 jumped 44 meters at one of the most famous jump ramps in the car world – the Colin’s Crest.

Inflection point was named Colin’s Crest in honor to one of the most accomplished racing drivers Colin McRae, who was basically unbeatable a few years back. Rally Sweden officials created a competition out of it. Every year they give an award to the team who makes the longest jump here and this year Hyundai beat everyone else. Interestingly, the Hyundai i20 WRC won by jumping seven meters more than the second closest. You’ll like this. Second closest is Ken Block. That is a chap who did this and this. So, he knows his stuff about cars.
The cars rally drivers ride in this year’s WRC are the best the world has to offer. Everyone of them is powered by a 1.6 liter turbocharged engine which is tuned to maximum. It is considered that every engine here develops much more than 300 HP all off which is transferred to all four wheels over the sequential six or seven speed gearbox. Driving this cars at speeds of 100 mph and more through the woods and over the small roads is a rather tough job and the rally drivers are possibly the most ludacris drivers in the world.
However, this might not be the longest jump in rally competitions overall. We remember that the BMW 3 series driven at Viru Rally 2014 made even a longer jump and we bring you this video too.

Hyundai Flyes 44 Meters Through The Air On The Rally Sweden

Hyundai Flyes 44 Meters Through The Air On The Rally Sweden

Rally Sweden is one of the most exciting driving events in the car world. Last week, the best rally drivers from all over the world took the chance... 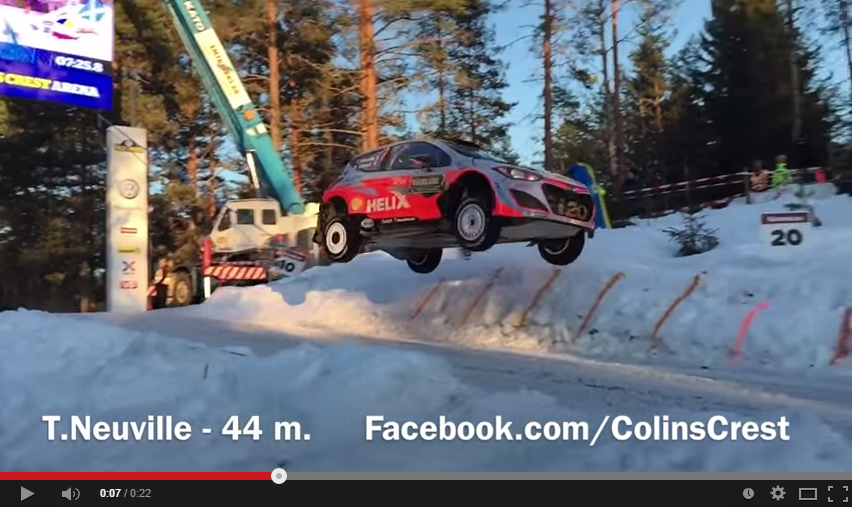