Doug DeMuro is back once again. This time he will try to hypermile the Hummer H1 he bought a while ago. As you might recall, the Hummer H1 isn’t exactly the most fuel efficient vehicle. Actually, it isn’t fuel efficient at all. The Hummer H1 was revealed in 1992 for the civilian market and the car was a direct successor to the military version used in almost every war the US has been in (and that’s a lot of wars).

The diesel engine in it is far from refined. It is actually closer to the old truck engine and that is why DeMuro reported extensive noise in the cabin during the highway drive at 60 mph. And that is actually all the Hummer H1 will do – 60 mph. It is not a lot by any means, and it means it’ll be overtaken by almost anything. Driving a car for one hour in one direction Doug succeeded to achieve 11 mpg on the highway, which is a bit sad and a bit bizarre. However, he drove normally, trying to use the highway the best he could. On the way back, he aimed at high millage. He tried to improve the aerodynamics (although rather floppy) and drive as fuel efficiently as possible. The results at the end were the same like on the first drive. The Hummer H1 returned rather disappointing massive 11,5 mpg which proved that this car really isn’t for everyone.
As a refresher, the Hummer H1 is powered by a V8 Detroit Diesel engine with 6,6 liters of displacement.

Doug DeMuro is back once again. This time he will try to hypermile the Hummer H1 he bought a while ago. As you might recall, the Hummer H1 isn’t... 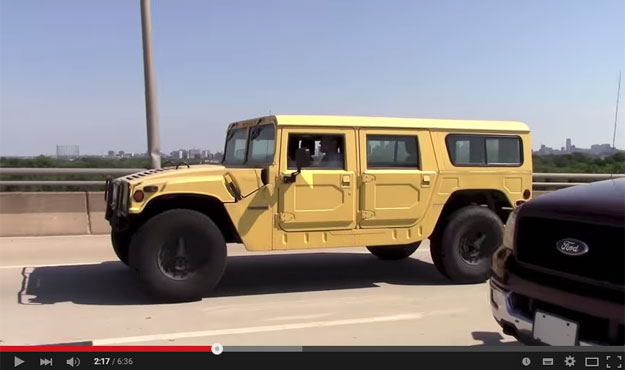