Ever since the Honda CRZ came out, there were a lot of car tuners who were eager to get their hands on this little hatch.  Its styling was relatively close to the old CRX and it’s a real head turner even without modifications.

Noblesse, a car tuner based in Japan, had their own version of the Honda CRZ Sport and they have fitted this hatch with various tuning components to improve its over all performance.  Visual pleasure is also a part of this upgrade and they have two versions of their modifications; a white muscular looking model and a black sinister looking model…and I personally prefer the latter.

Modifications include a rear wing, rear diffuser, a new carbon fiber hood and a set of massive wheels.   The revision done may sound so simple but their creation turned out to be totally breathtaking!   This can even be the answer to every man’s aching heart and you just got to love this piece of art.

The only problem that this car had when it was introduced to the market was its power output.  The Honda CRZ has everything but this was a hybrid and it lacks muscle under the hood.  Taming this to the hands of the car gods is a really good idea, unfortunately no specs were given out or any news if they have tweaked the powerplant. 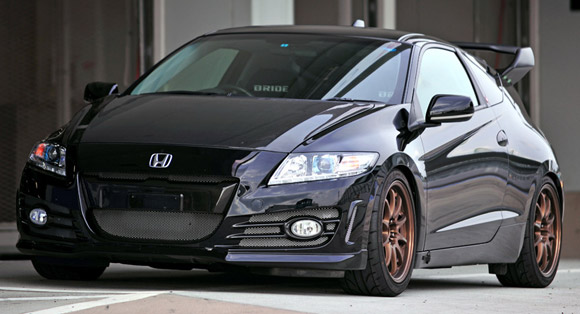 Ever since the Honda CRZ came out, there were a lot of car tuners who were eager to get their hands on this little hatch.  Its styling was...