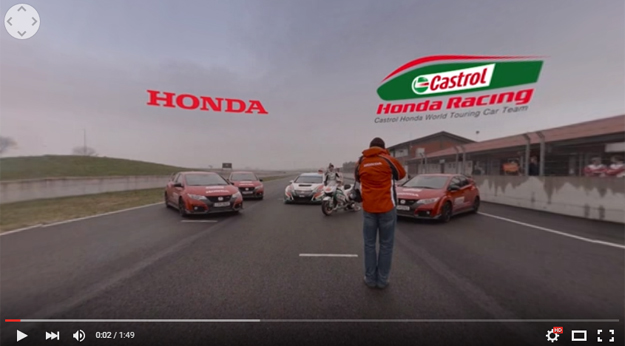 Here we go again – a 360-degree youtube video only for our enjoyment released by Honda depicts a race between the Civic Type R, the Touring car and the MotoGP Honda Bike. It is awesome, no question there. It seems that 360-degree videos are getting the popularity they deserve as Nissan, Red Bull and many other are starting to endorse the technology more than ever before.

This fight between a bike and a car is a new take on the century old question – which one is faster and which one is better – a bike, or a car. Here, we can see the road going Civic Type R and its race track sibling kicking it out. Now, Honda really did not invest a lot into post editing and it seems that the usually exciting races between cars and bikes end up as a bit of disappointment. Although we have a chance to see a lot from almost every perspective, the lack of excitement and sheer bloodshed on the track definitely left us underwhelmed.
Do not get us wrong, however, Honda bikes and race cars are awesome and incredibly fast but the viral video needs a bit more than just the 360-degree function. On the other hand, this is the best way for us to acquaint ourselves with the wast and powerful Honda racing team. And yes, we get to enjoy driving next to Jack Miller.

Here we go again - a 360-degree youtube video only for our enjoyment released by Honda depicts a race between the Civic Type R, the Touring car and...