We finally have what Top Gear announced, what Ferrari declined and what all of us want. This is, ladies and gentlemen, the ultimate comparison test of the Ferrari La Ferrari, the McLaren P1 and the Porsche 918 Spyder and it is as awesome as it gets. Back in the days when Top Gear was Top Gear, the three chaps got all three cars but with special instructions from Ferrari not to compare them in a way we’d all like them to be compared – on the track. Actually, if we remember right, Ferrari said that any private owner who has the car and who lets it be compared against the two will be forever expelled from the Ferrari VIP section and he will not be able to buy any other super Ferrari in the future. Well, it seems that TheSupercardriver found such a man – Paul Bailey.

This is a man who doesn’t only have the Ferrari LaFerrari, but has all three hypercars of today and if you are following our blog you may remember we’ve already showed his cars. Now, however, the cars are at Silverstone and all of them have been driven by the British Touring Car Champion Mat Jackson. For the sake of comparison the cars have been serviced a week before, every one of them had a full tank of gas and all three were driven only a couple of hours apart in the same conditions. Amazingly enough, all three cars had really similar lap times, thus showing just how close all three of them are in terms of track speed. Of course, with a bit of tire and suspension adjustments, we are certain all three cars could achieve slightly better times, but as every one of them went under sick 59 seconds over the Silverstone track, we can conclude only one thing – it’s good to be alive now! Watch the video for the times – it’s awesome.

Holy Trinity: LaFerrari, P1 And 918 Spyder Finally On Track In A Lap Time Fight (We have the laptimes)

Holy Trinity: LaFerrari, P1 And 918 Spyder Finally On Track In A Lap Time Fight (We have the laptimes)

We finally have what Top Gear announced, what Ferrari declined and what all of us want. This is, ladies and gentlemen, the ultimate comparison test... 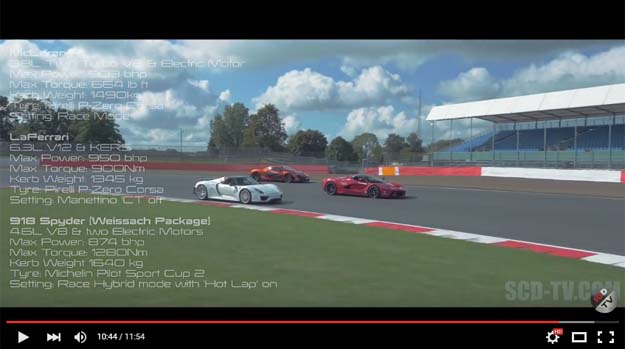