G-power is a car tuning company based in Germany and created a new Typhoon Package for the BMW X6 M which they called as the X6 Typhoon RS Ultimate V10.  The tuning company claims that this is today’s fastest SUV and with the looks of it, they created pure lunacy and monstrosity out of the BMW X6 M.  Their creation will only be limited to 5 production models.

G-power’s objective was not only to build the fastest SUV but also to harness the power of the V10 engine bringing out its formula 1 characteristic.  The cabin was not left out to the tuning company’s dedication to build a top notch SUV, Pure quality leather material was used and was refurbished from top to bottom, from the trunk to the dashboard all of which are trimmed up to the smallest detail.  Four Individual ultra-light carbon seats also filled the cabin to help in weight reduction.

This SUV’s tuned heart is just massive, it is a tweaked 5.5 liter V10 engine fitted with a twin ASA T1 316 supercharger and a reprogrammed ECU plus an all new exhaust system, a MAHLE forged pistons and a 7 bearing crank shaft was also used to give out that aggressive power.  The SUV can now give a roaring 900 bhp with a top speed of 330 km/h, this will skyrocket from 0-100 km/h in just 4.2 seconds.

This is not just a mean-looking SUV… G-power has built something that will soon be placed on record books and on the hearts of speed addicts! 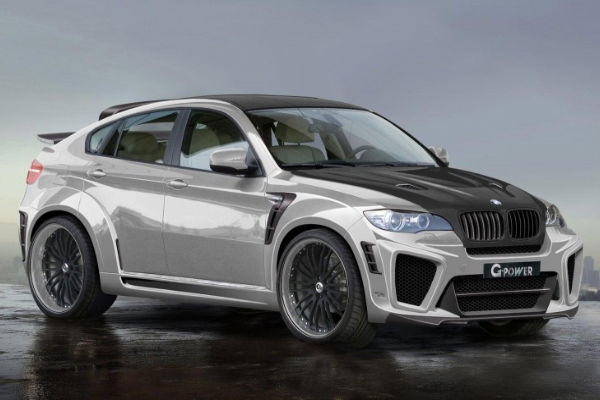 G-power is a car tuning company based in Germany and created a new Typhoon Package for the BMW X6 M which they called as the X6 Typhoon RS Ultimate...