This is something else. The French are famous for building quite remarkable stuff and this time they are using some serious firepower to make the ultimate drag race in the car world. Now, the pilot goes against the racing driver and the Porsche 911 Turbo S goes against a helicopter. Actually, the Porsche 911 Turbo S is taking on two helicopters trying to make a statement on the French airfield.

The first helicopter the mighty German car is going after is the Caiman Helicopter, also known as the NHIndustries NH90. Developed by a company in Europe – Eurocopter, the NH90 is a multirole military helicopter capable of many things, one of which is reaching the maximum speed in excess of 186 mph. As this is a rather heavy and large helicopter, the Porsche 911 Turbo S succeeded to beat it in a drag race for a couple of car lengths. However, that was just the first race. The second race was a bit more complex.
Using an attack helicopter called the Eurocopter Tiger which is half size of the NH90, the French army had an edge. The Porsche 911 Turbo S is capable of accelerating to 60 in less than 3,5 seconds and it finished the job faster than the chopper. However, when the pilot get this Tiger to the speed nothing could beat it. More than 1.300 HP spun up those blades creating so much power it accelerated the 6.750 lbs helicopter at an insane rate. The pilot won of course, making the Tiger the winner of this rather interesting comparison.

This is something else. The French are famous for building quite remarkable stuff and this time they are using some serious firepower to make the... 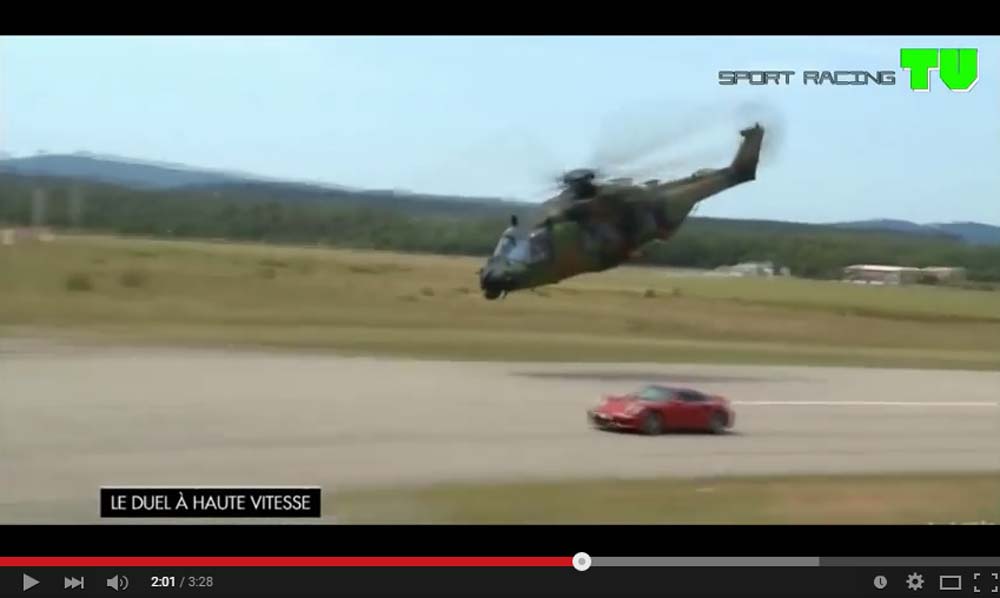