Back in the Sixties, Ford made entrance in the world’s most demanding race – the 24 Hours of Le Mans. Although they didn’t win right away, they’ve made an impact. However, real dominance started in 1966 when the Ford GT40 won all the places on the podium, dominating in front of Ferrari. Interestingly, Henry Ford II ordered the engineers to develop a car which will be able to beat every other vehicle from Europe. They’ve done just that and the innovations on the GT40 were so extensive that the sports car world was changed forever.

Today, Ford announced that they are coming back to the Le Mans. In 2016 they’ll compete in the LM GTE Pro class with the likes of Porsches, Aston Martins, Ferraris (only private teams) and Dodges. Interestingly, official Ferrari team from Maranello is absent and in the video attached at 1.43 you can see a prancing horse getting scared of Ford. Yes, Ford is mocking Ferrari for its absence on the most exhilarating race in the world.
The car Ford is preparing for the 2016 24 Hours of Le Mans race is a new Ford GT which will be powered by a 3,5 liter EcoBoost engine. We already saw the new Ford GT revealed a few months ago and this one with carbon fiber body and aerodynamic elements adapted for track use will try to make history once again. The comeback in 2016 was slated due to Ford’s first win in this race which happened exactly 50 years before 2016.
The epic video Ford revealed shows that they aren’t coming to Europe only to mark the occasion. They are coming to France to win.

Back in the Sixties, Ford made entrance in the world's most demanding race - the 24 Hours of Le Mans. Although they didn’t win right away,... 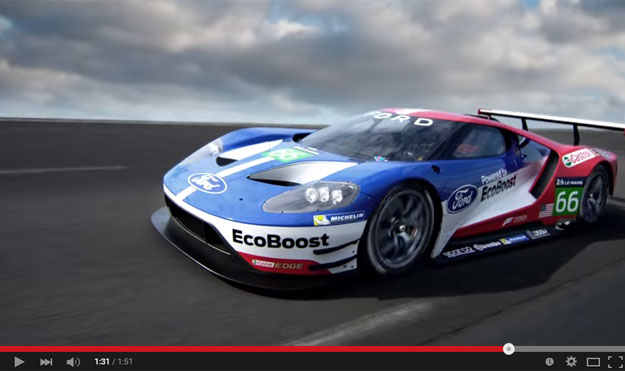