In order to make a controversial commercial for their new clothing collection that will be presented at the Fashion Week, rag & bone created a highly bizarre video which will definitely steer the mind of everyone into cars. They’ve put an actress Gabriella Wilde clothed in rag & bone clothes and just behind her you can see a beautifully perfect 1979 Porsche 911 SC. To get publicity they desire so much, they’ve done the thing you shouldn’t ever do to a classic Porsche – destroyed it. Dropping a concrete road barrier on it they’ve totally hammered down the great classic Porsche 911 and immediately attracted the hate of all the car world. If you ask just how powerful the car world is, than take a look at that “Like Meter” under the video. Anyone who see this video simply had to click unlike.

Unfortunately, that was probably the goal of the company, to excite controversy and make a scandal. They’ve definitely succeeded in doing so, but it is a legitimate question, is this going to be a boomerang that will kick them in their head?

More importantly than that is that they actually got an answer from no other than Hagerty Classic Cars who filmed “hag & chrome FW15 Campaign feat. The Porsche” video in the same vein as they did film the rag & bone campaign. Basically, they’ve taken a product rag & bone made and set it on fire just behind classic Porsche cars and one beautiful new Porsche 911 who acted like Gabriella. All in all rag & bone wanted to show with this thing that they are killing classic in the fashion world which is good, but it is not good to kill it this way. Some may call it even terrorism, or act of utter cruelty.

In order to make a controversial commercial for their new clothing collection that will be presented at the Fashion Week, rag & bone created a... 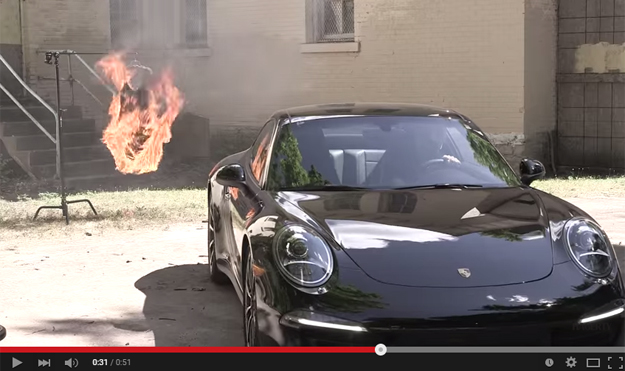