Since the beginning of time petrolheads asked themselves one question – motorcycle or a car!? Many tried to make the best possible comparison between the two and now we have one more. Please, bask in the greatness of two of the most amazing vehicles the world have ever seen – the Bugatti Veyron SuperSport and the Kawasaki H2R. The Bugatti is the fastest and one of the most amazing cars that ever were, while the Kawasaki H2R is the fastest and most powerful series production motorcycle ever devised by humanity. Yes, Hayabusa was the fastest some time before, but Kawasaki really stepped the things a notch when they’ve created and revealed the 300 HP superbike which looks so sinister and dangerous not everyone will be bold enough to ride it.

Making a running start at 50 mph, the Bugatti Veyron Supersport and the Kawasaki H2R entered the epic drag battle in which the Veyron had an edge at the start. Massive 1.200 HP catapulted the car to some serious speed of up to 160 mph in just a few seconds. However, the fight against air is tough. Being much bigger, Veyron needs a lot of more power to fight the sheer pressure of the atmosphere. That is why the Kawasaki H2R achieves higher speed and wins at the end. Racing on the closed airfield, the fastest car in the world achieved 180 mph, while the fastest bike in the world achieved the speed of 194 mph.
Of course, we doubt that Kawasaki would stack up against the Veyron at the track, but then again, this is one badass bike.

Since the beginning of time petrolheads asked themselves one question - motorcycle or a car!? Many tried to make the best possible comparison between... 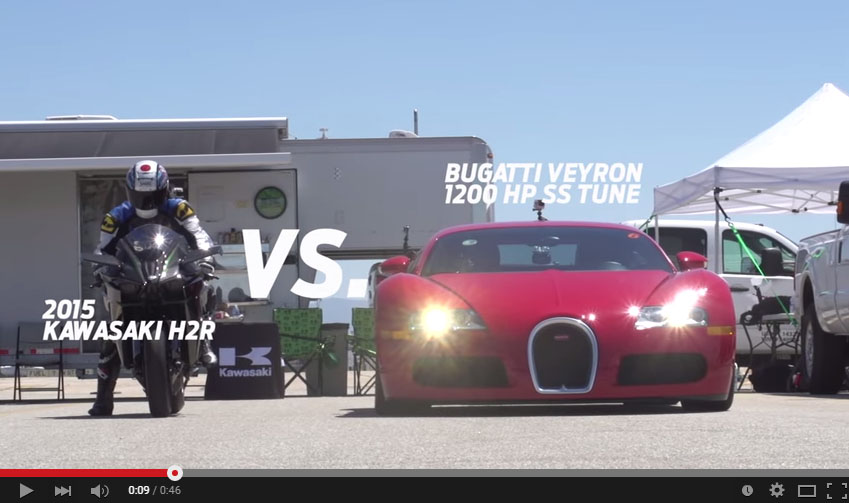