German Police uses Porsches, Italian Lamborghinis and police from Dubai uses Ferraris, Lamborghinis, McLarens, Bugattis, Rolls-Royces, Brabus tuned Mercedes, McLaren SLRs, Bentleys, Beemers, Audis and other stuff you’d like to have in your garage. This time, they’ve added one more vehicle to the impressive lineup and you’d be surprised to know that the newest cool police car is a, wait for it…a  Lexus.

Yes, we know you just thought that Lexus couldn’t be cool no matter what, but get a grip and think about the Lexus RC F. It is a new mid sized coupe based on the IS architecture and it looks spectacular. Painted with green and white colors to give it that distinctive Dubai police look, the Lexus RC F from Dubai Police Department is powered by a stock engine. That means it’s got a five liter V8 monster kicking out 470 HP and 389 pound ft of torque. Is that enough for a police car!?

Well, it depends where you operate. That would be enough in almost any other city in the world except in Dubai. In Dubai, millionaires and billionaires drive cars that have engines developing in excess of 1.000 HP. And we are not talking about an occasional driver going by in such a car every now and then. We are talking about tens of thousands of supercars roaming the streets of Dubai. They really need this, for actual and for marketing purposes as well. 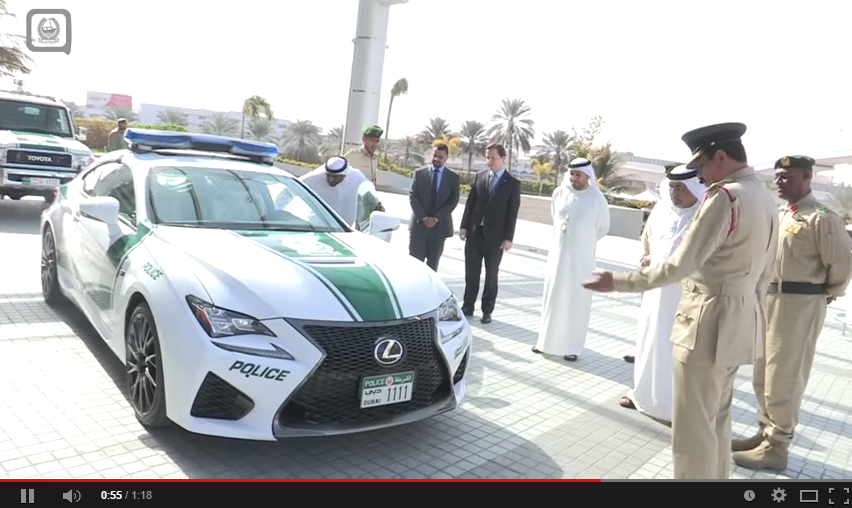