After only a few reviews of the Jaguar F-Type V6 S, the Internet world was mesmerized by the sound that small three liter engine develops. According to some, Jaguar made the best sounding V6 engine ever and the fact that it is compared with the V8 and V12 engines is only saying that Jag did the job the right way.

However, to put into perspective just how right, we bring you a video of our guy from Vehicle Virgins who filmed a magnificent sound comparison between the Jaguar F-type V6 S and the Aston Martin Rapide S V12. The Rapide has twice the cylinders, twice the engine capacity, it costs twice as much, but does it sound twice as good!?
The only way for you to find out is to click that Play button and put headphones in your ears. That way, you will certainly cherish the amazing prospects of the exhaust in the Jaguar and in the Aston Martin.
As a refresher, the V6 S engine in the Jag is a turbocharged unit developing 380 HP. According to many, this is the best engine you can have with a Jag F-type. It provides the car with exceptional speed, it doesn’t weigh too much and it can be relatively fuel efficient. Bigger, five liter supercharged unit gives this thing power to match that of the Nissan GT-R and the Porsche Turbo, but maybe, it isn’t even necessary to have so much power. On the other hand, the mighty Rapide S has a V12 under the bonnet. It gives it around 500 HP of power and makes the large sedan go like stink. However, the real question is, does this thing sound better than the much less expensive F-Type engine!?

After only a few reviews of the Jaguar F-Type V6 S, the Internet world was mesmerized by the sound that small three liter engine develops. According... 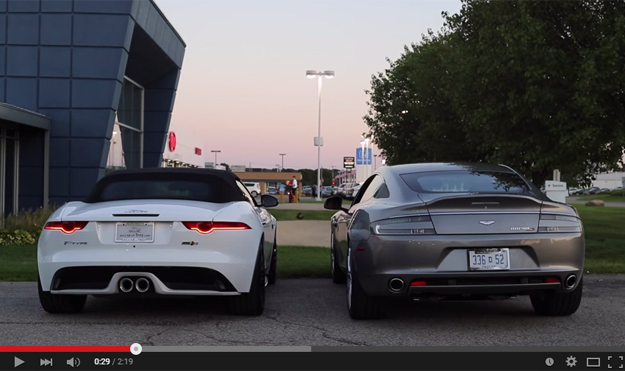