As one of a number of events held at the Goodwood Festival of Speed, this one is certainly one of the more entertaining. Here, you can see the Nissan Juke RS driving on two wheels, however, this time the guy driving it wasn’t just entertaining the crowds, he was breaking a record. Terry Grant, a stunt driver, was behind the wheel of this magnificent little crossover when he set off to make the fastest 1 mile pass driving on two wheels. The car he was using was the Nissan Juke RS, which is basically the best possible Juke you could buy.

You will hear the commentator in the video saying that this thing has the GT-R underpinnings, but that is not the case. The guy commentating definitely mixed this one with the Nissan Juke R 2.0 with a GT-R engine and GT-R suspension. Nevertheless, the Nissan Juke Nismo RS is a nice hot crossover and with the skillful driver behind the wheel, a lot of incredible stuff can be done.
As it turns out, driving on only two wheels puts enormous pressure at the side of the tires. The heat generated there is so enormous that driving for more than for a few minutes would absolutely dismantle the tires. It may be that some tire manufacturing company developed and provided special tires for the event thus ensuring top performance.
Terry Grant started his mile long race in order to top the world record for the fastest mile mark pass on two wheels. And yes, he succeeded. The previous record was at two minutes and 45 seconds while the record Grant achieved was a smashing 2 minutes and 10 seconds. That is a hell of improvement.

As one of a number of events held at the Goodwood Festival of Speed, this one is certainly one of the more entertaining. Here, you can see the Nissan... 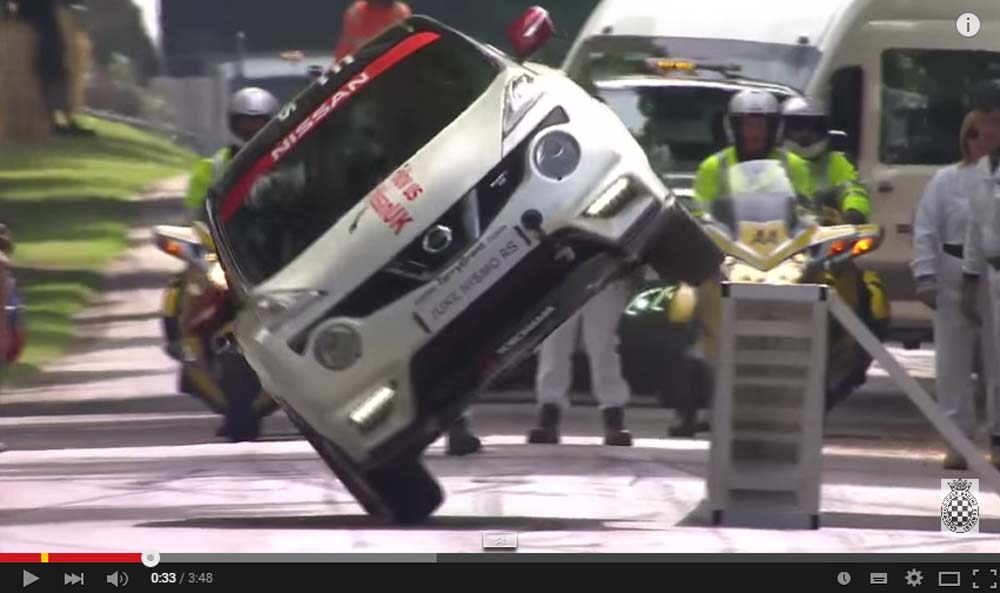