What is exactly the Audi Quattro Challenge? Basically, Audi got together two racing drivers and set them loose in racecar on some frozen lake in Europe. It is as fun as it sounds. The last effort by Audi Deutschland was to teach the successful German Alpine Skier Felix Neureuther to drift on a race track made on a skiing resort. He got the best car – the Audi S1 EKS RX and the best teacher there is – Mattias Ekstrom. The German skier, who won a gold medal back in 2004 at the ski event in Europe and Silver and Bronze in 2013, is a fast learner and after just a couple of tries he succeeded to drive that rally spec S1 almost as good as a professional racing driver.

The one minute video shows how Felix is prepared for the race and shows how he learned to drift a 560 HP rally car between the ski poles on which the Audi’s four rings are sitting proudly.

The car in which he learned the tricks is a World Rallycross Championship car used by Mattias Ekstrom. It is an S1 Audi with modified suspension, engine, all wheel drive and lightened chassis. With less than 1000 kilograms of weight and with a two liter engine that churns out 560 HP, this quattro beast is able to accelerate to 62 mph in less than 2 seconds and the driver controlling it is really on the knife edge at all times.

Felix Neureuther did a  marvelous ride and made us eagerly wait for the next quattro challenge video. We would like to see a Formula 1 driver in there somehow.

What is exactly the Audi Quattro Challenge? Basically, Audi got together two racing drivers and set them loose in racecar on some frozen lake in... 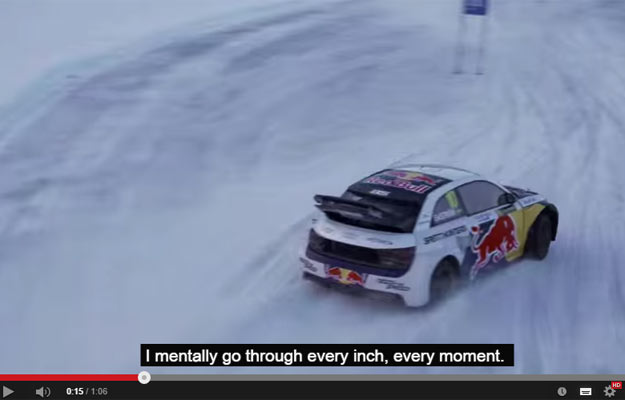