After tuning other SUV’s into drooling beauties, Project Khan is again back to give out new madness to car fanatics.  They have laid their hands on yet one stunning SUV and it’s the lucky Audi Q7 who got the chance to get dressed up by this magnificent car tuner.  It’s somewhat rare for a car tuner to modify a large vehicle, they mostly focus on sedans, sports cars or exotic cars and this is really great news that Project Kahn is not limiting their car prowess but rather exploring their talents.

The Audi Q7 received a pearl soft white paint that exudes elegance and luxury and to give it that muscular stance, a widened body kit which includes front wheel arches with vents is installed standing on a massive 21 inch Kahn RS-X wheels.

The interior received a stunning upgrade using black quilted leather with contrasting red stitching and a red lining at the center. Dials on the dashboard were also emphasized by the colors of red and white.  A panoramic glass roof was also installed.  The front fascia of the Audi 7 Project Kahn is just staggering and its one ultimate beast ready to turn heads on the road. 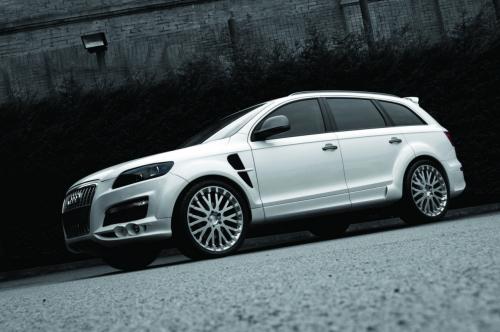 After tuning other SUV’s into drooling beauties, Project Khan is again back to give out new madness to car fanatics.  They have laid their hands...