Nissan competes at this year’s 24 hours of Le Mans with their own LMP1 racer. It is a rather bold attempt to win the crown with the first ever LMP1 racer with front wheel drive. As crazy as it may sound, the Nissan GT-R LM Nismo really sends its power to front wheels which are actually much wider than the wheels at the back. That however, doesn’t change the fact that the Circuit de la Sarthe is a very tricky place where every mistake gets punished hard. If you want the best ever look at the racetrack then press play and enjoy looking at the first 360 degree video of the Circuit de La Sarthe filmed from the front end of the rather fast and exciting Nissan GT-R Nismo.

Here you can follow the best line that the racing drivers take when driving their machines. You can see all the curves, enjoy top speed at the Mulsanne straight and even see the engine rpms and the speed the car achieves on rather nicely done graphics. This is not the first 360 degree video ever (we saw the same thing on the RedBull F1 car) but this one shows what an epic race the 24 Hours of Le Mans is.
Interestingly, Nissan even stated that they’ve done some editing to the video. “This was filmed on a closed circuit at the end of a Le Mans test session. The GT-Rs were travelling at a speed restricted rate, so the video has been sped up a little to match a FAST GT-R lap, along with the HUD Graphics to match. We figured this would make it more interesting as a 360° experience.”
So there you have it. This is how a lap on the Circuit de La Sarthe looks like – it’s epic.

Nissan competes at this year’s 24 hours of Le Mans with their own LMP1 racer. It is a rather bold attempt to win the crown with the first ever LMP1... 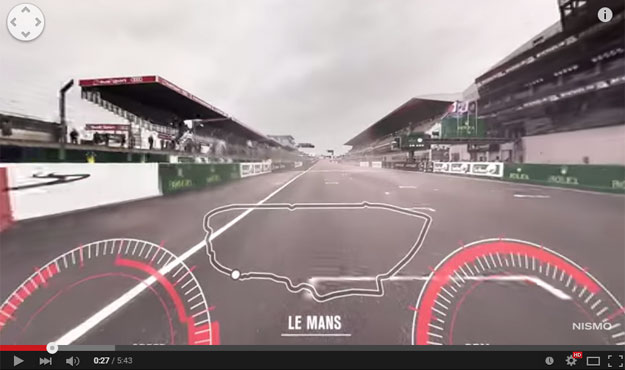