Have you ever wondered just how fast European small hatchbacks are? We asked ourselves this question, but then, out of nowhere, the ultimate drag race between the Clio RS Trophy, the Mini JCW and the Corsa OPC surfaced. Motorsport Magazine did the comparison with the trio and the measuring devices were cloaking the speed and time at the 1.000 meter mark.
As always, the cars in question were the most powerful version of well-known machines. The least powerful one is the Opel Corsa OPC with 207 HP and a 1,6 litre engine inside. Actually, the smallest car here has the biggest engine. The two-litre turbocharged four banger in the Mini JCW definitely proved that it has the most punch of them all. The engine is used even in large BMW cars but for the Mini JCW it received a slight power decrease to just over 230 HP (for some other cars it develops around 250 HP). That is huge power for such a small car and you can see how easily it walked away from the competition.

The third competitor was the Renault Clio RS. Although it lost some of its appeal from before due to the integration of a slightly less sophisticated suspension, five doors and smaller 1,6 litre turbocharged engine, the version depicted here is actually a Clio 220 Trophy. It is the most powerful version of them all. With nice power and quite brisk acceleration it easily walked pass the Opel Corsa OPC, but it really couldn’t hold the candle to the massively fast and outrageously cool Mini JCW. Interestingly, all the cars weigh almost the same. The Mini is at 1.220 kilograms, the Opel at 1.218 kilograms and the Clio at 1.204 kilograms. Impressive.

An Intense 1.000 Meter Race Between Europe’s Most Amazing Hot Hatches

An Intense 1.000 Meter Race Between Europe’s Most Amazing Hot Hatches

Have you ever wondered just how fast European small hatchbacks are? We asked ourselves this question, but then, out of nowhere, the ultimate drag... 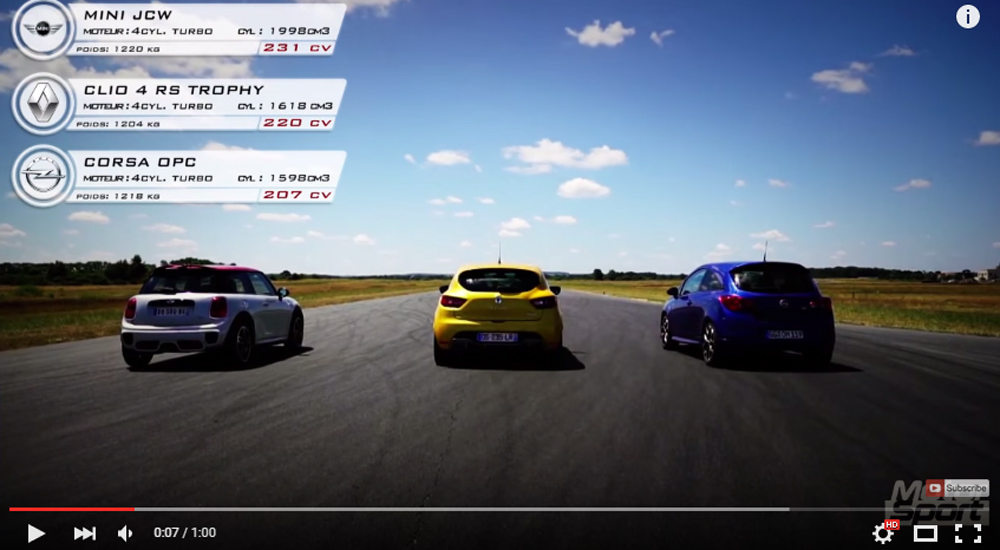