This, ladies and gents, what you’re seeing here is the worst and most amazing traffic jam in the world. Beijing residents returning to their city after a few days of break made such a mess on the G4 Beijing-Hong Kong-Macau Expressway that a man took out his drone, flew it over and recorded a traffic jam you never thought possible.

However, let us sink deeper here. Some parts of the G4 Beijing-Hong Kong-Macau Expressway have 50 lanes in one direction. Actually, they have 50 lanes at the tool place and after it, the 50 lane traffic has to fit the 20 lane motorway. 20 lanes!? Yep, you’ve read it right. Highways in China can be so large. So, trying to fit 50 lanes worth of cars in a 20 lane motorway is hard. It is so hard that many hours passed before all this jam cleared out, but it did! You know why and how? Because Chinese drivers are used to traffic jams since they are just a part of people’s lives. It is estimated that an average Chinese driver spends 9 days in traffic jams a year. For instance, the average driver in Germany spends 36 hours in jams a year. That’s almost creepy. The data is right. TomTom navigation company gathered it up and showed that traffic jams like this aren’t new to Chinese drivers.
All in all, watch through the video and enjoy seeing one of the most disturbing traffic jams in the world. After seeing this we can only think about all the congestion all this petrol burning cars are making. It’s awful to say the least.

This, ladies and gents, what you're seeing here is the worst and most amazing traffic jam in the world. Beijing residents returning to their city... 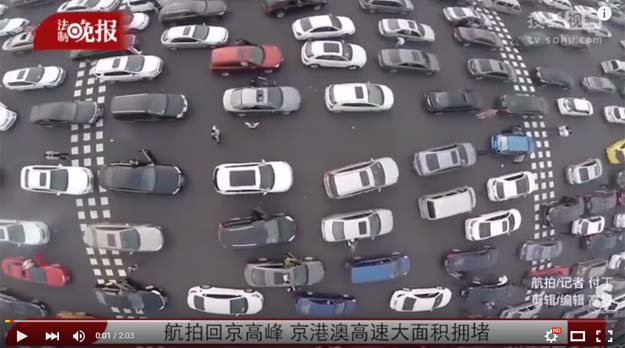