Insanity is the word best describing the latest /Drive video. Focusing on making the most of the off-road track, the /Drive presenters chose two mad vehicles to have a blast. Located in Wells, the track is long, with many turns, elevation points and extreme corners to be conquered. Luckily, the drive these guys are going to make is in the Ariel Nomad, the Ariel Atom’s off-road brother. The insanely cool vehicle has only the RWD, but it has a suspension which will never allow you to hit the ground. The race held here was driven by the magnificent Nomad and the insane Suzuki Dirt Bike powered by a 60 HP engine.

The results are simply awesome and astonishing. Just by looking at the race and sheer lunacy of the 240 HP Nomad against the mighty Dirt Bike, you can see that some really clever engineering is at work here. The Nomad isn’t beautiful, it doesn’t even have a four-wheel drive, but it has a heart of an elephant, power to shatter almost anything and the appeal of a sports car. That’s exactly why the Ariel Nomad is important. It brings together every aspect of the supercar and shows its incredible off-road packed tech which grants it with the speed of a Dakar racer.
Interestingly, the bike is also an awesome racing vehicle- one you’d have to be crazy to ride like this man – Graeme Irwin, a member of the Suzuki GB Motocross. This is a showdown of a car and a bike. Both are awesome, but one is better. Take a look at this awesomeness.

Insanity is the word best describing the latest /Drive video. Focusing on making the most of the off-road track, the /Drive presenters chose two mad... 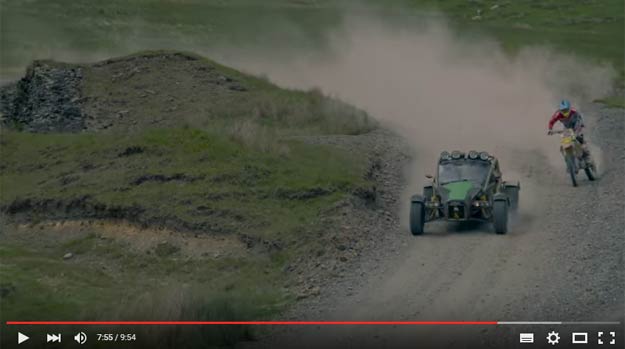