Only 12 years ago, the Porsche Carrera GT was the pinnacle of that what could be done with the car. It has a perfectly balanced and crafted race engine positioned in the middle behind the driver. It has a magnificent manual transmission and a rear wheel drive and it has the speed of a supercar. However, looking at it from the perspective of the hypercars of today, the Porsche 918 Spyder feels like an outdated old computer which you can’t use for much. Luckily, its value is much more than what its supercar performance can deliver.

We have all been waiting for a race between the old magnificent Carrera GT and the newest Porsche 918 Spyder. During the Driver Cup, probably held somewhere in Brazil, the 918 Spyder proved its worthiness by destroying the 612 HP supercar in a drag race. Really, we aren’t even surprised. The old Carrera GT has the power to accelerate to 62 mph in 3,9 seconds, while some reported that the newest 918 Spyder could accelerate to 62 in as low as 2,5 seconds.
Basically, the new car can catapult itself like a jet fighter from an aircraft carrier and that is where the 918 Spyder get the best jump against the Carrera GT. However, the video shows just how powerful the new car is. It continues to accelerate so fast the camera almost lost sight of it after 20 seconds. No wonder there. The hypercar is powered by a powerful petrol engine and by two electric engines, thus powering all four wheels at all times.

Only 12 years ago, the Porsche Carrera GT was the pinnacle of that what could be done with the car. It has a perfectly balanced and crafted race... 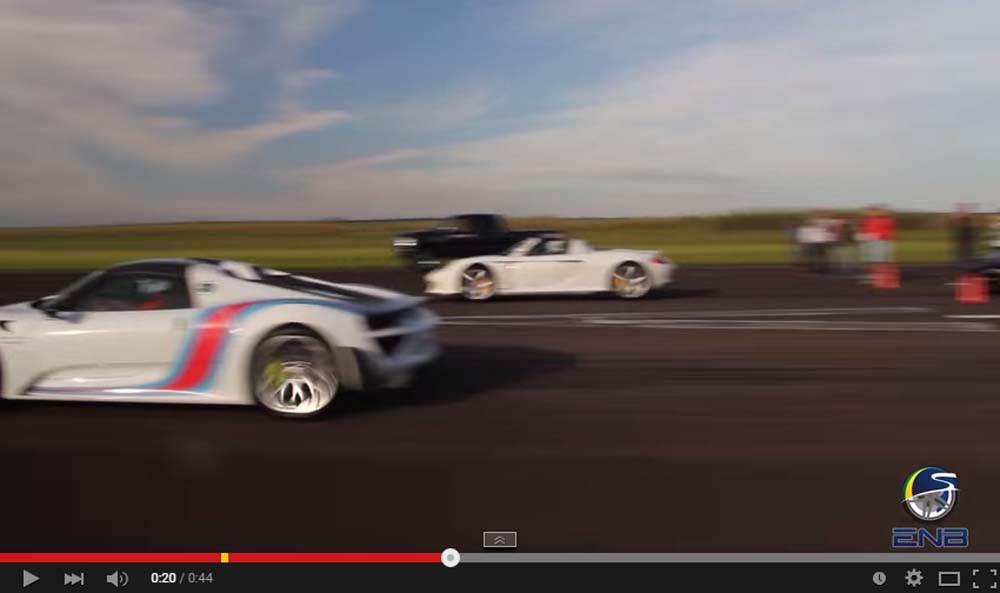