We have seen a number of magnificent videos about the McLaren P1, the Ferrari LaFerrari and the Porsche 918 Spyder. However, this one from May 2015 filmed by the vlogger behind the youtube channel SupercarChannel92 might be the most interesting. You won’t see or hear anyone talking about them or presenting them, but you will see all three of these cars making their way on the wet soaked track at Silverstone.

Back in the day when Top Gear was active, the famous trio wanted to compare these three on the track, but Ferrari was against it. Actually, they were so crossed with the idea that they did all they could to prevent Top Gear comparing the cars. However, there are some car collectors in the world who own all three cars and one of them is Paul Bailey whose cars were on the Silverston the day SupercarChannel92 hosts were filming all the action there.
As a refresher, these three cars aren’t the most expensive vehicles in the world, but they are the most advanced. All of them have a hybrid drive. A few electric motors are helping out the wonderful internal combustion motors to achieve the best possible performance and to transfer all that power to the ground. Out of the three, only the Porsche is an all wheel drive car and it roamed the Nurburgring in 6 minutes and 57 seconds, which is the fastest for any production car ever. The LaFerrari never hit the track to officially cloak the time and some suggest that the McLaren lapped the ring but the time wasn’t on par with that of the Porsche.
In the video we published, you can see and hear all three cars in their full glory. All three of them are simply outstanding pieces of technology.

All Three Hypercars In An Epic Showdown

All Three Hypercars In An Epic Showdown

We have seen a number of magnificent videos about the McLaren P1, the Ferrari LaFerrari and the Porsche 918 Spyder. However, this one from May 2015... 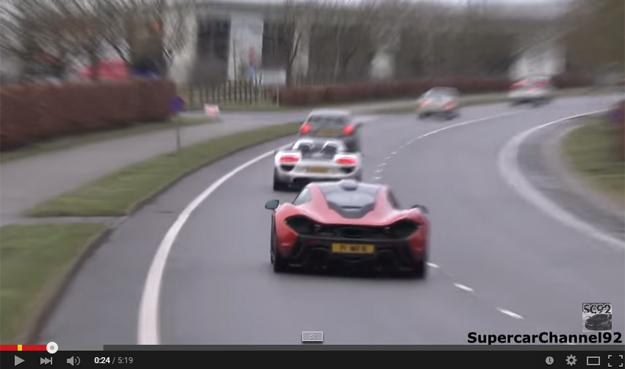