We knew the BMW i8 is quite an impressive car. It is also fast, but we did not quite catch just how fast is it. Of course, official specs say it will pull 62 in 4,4 seconds, but what can it do in the real world?
Luckily, the same questions were posed by the guys at BerlinTomek. They, as capable as they are, promptly got the i8 and put it on the track against one of the best looking cars of all time – the Aston Martin V8 Vantage. This resulted in a race so spectacular that we are still mesmerized by it. As a refresher, we will say that the i8 is powered by a hybrid system built around the modern three cylinder turbocharged petrol engine. The propulsion system is quite potent. Churning out more than 360hp it can give the aerodynamic car some awesome performance.

In the left corner is the Aston MArtin V8 Vantage. Now, we have always known that Aston Martin does not built exactly the fastest cars in the world, so a comparison between these two seems logical. Much bigger and a bit heavier, the Aston Martin definitely has the power to race the most modern car out there. Actually, its 4.7L V8 engine is good for 420 HP and 470 Nm of torque (the Beemer had got 100 more). With the Launch control activated on the BMW and an insane growl of the V8 from the Aston Martin, the race can commence.
Now, bear in mind that this BMW is one of the most advanced vehicles ever. Despite the three cylinder engine and less power, it has an all wheel drive and aerodynamics unmatched by the Aston Martin. And you can feel it. Press play and enjoy the race of the best from the old world and the best from the new world.

We knew the BMW i8 is quite an impressive car. It is also fast, but we did not quite catch just how fast is it. Of course, official specs say it will... 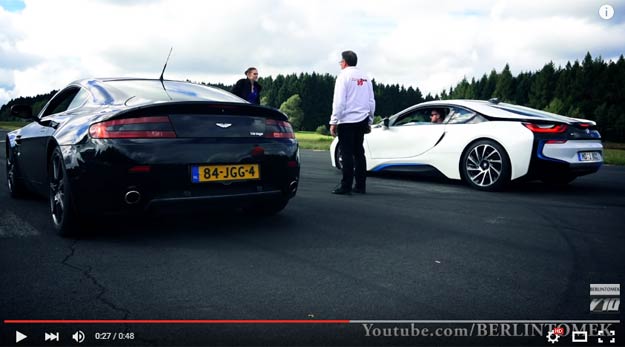