Racing helicopters against the Porsche 911 Turbo S is one thing, so we better come back to the ground for this one. Guys from New Zealand just drag tested the AMG car with the biggest engine the company from Affalterbach, Germany could produce and a car with their smallest engine ever. It’s an epic race between the Mercedes S 65 AMG Coupe and the Mercedes GLA 45 AMG. So, it’s not the most fair race in the world, but it certainly is interesting and entertaining.

As they’ve reported the smaller GLA 45 AMG had an edge at the start. With the launch control system and a four wheel drive, the car is capable of transferring all the torque to the ground in much more efficient way than the beautiful S 65 AMG Coupe (check this out from IMSA). More than 360 HP from the two liter engine can be transferred in such a way to accelerate the small crossover to 62 mph in 4,8 seconds. Although the S 65 AMG can do even better than that in this race it didn’t do so. The GLA 45 AMG made a huge effort and made the S 65 AMG look like an old V8 powered lazy coupe. When the enormous engine kicked in, the S surged and almost overtook the GLA, but the end of a ¼ of a mile race was too close for the full win. The end result shows that the interesting Crossover hit the clock at 12,02 seconds, while the S 65 AMG Coupe finished the race at 12,05.
This race was rather close and we really want to know what would happen if the A 45 AMG was in the place of the GLA 45 AMG. Also, it would be nice to have that launch control on this magnificent S-class Coupe.

Racing helicopters against the Porsche 911 Turbo S is one thing, so we better come back to the ground for this one. Guys from New Zealand just drag... 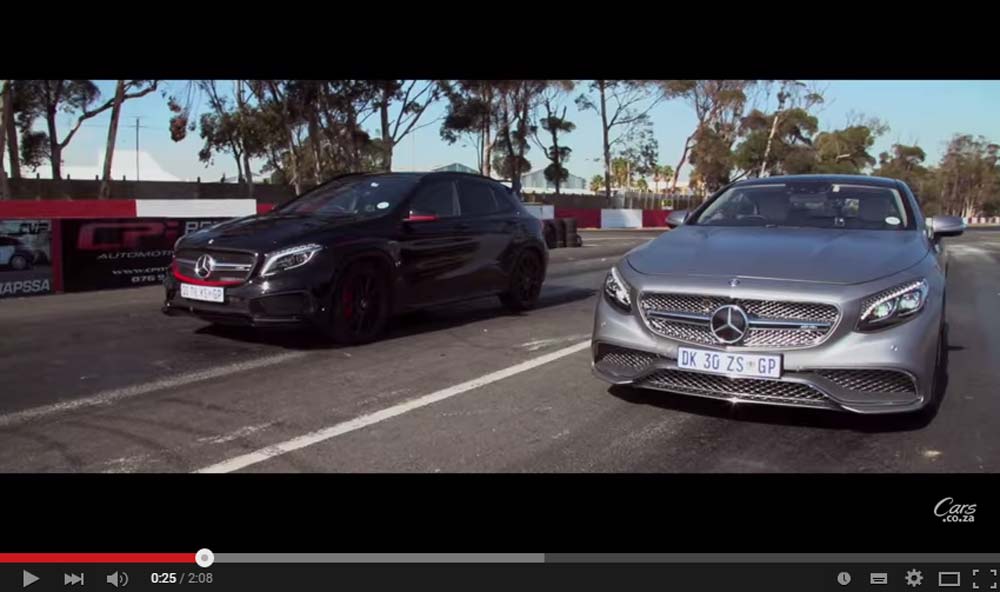