We have seen a number of drag races between the Tesla Model S and some other powerful muscle cars. The fight between the Hellcat was one of the most interesting ones, but the newest rolling start drag race against the Porsche 991 911 GT3 is something that shows a totally different side of the Model S P85D.

We all know that the electric engines in the Tesla Model S provide all the torque and all the power in an instant. That is what enables the P85 D to accelerate so ferociously to 60 mph. However, after it passes 60, the acceleration slows down. To realize just how much it slows down, one should watch this thing in a fight with a racing Porsche car. The six cylinder engine inside the Porsche is well capable of making the 911 a truly remarkable car and racing it against the electric seven seater somehow doesn’t’ feel right.
However, the Tesla Model S P85 D hold its ground for a while, but a few seconds after the mark that says – give it full beans – went by, the Porsche started to coast of with a sound of a fighter jet.
We have already talked a lot about the 911 GT3, so seeing it on track against a car like this is truly remarkable. We have to point out that the Porsche vehicle doesn’t have any additional aftermarket modifications. This is a 500 HP+ car with a low weight construction and astonishingly well sorted out suspension, grip and aerodynamics.

We have seen a number of drag races between the Tesla Model S and some other powerful muscle cars. The fight between the Hellcat was one of the most... 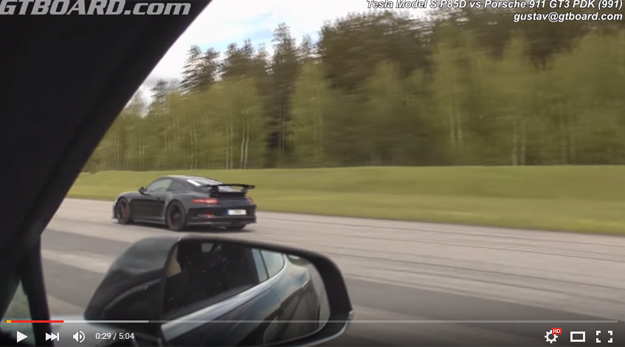