Cadillac released their newest V vehicle. We all know what that famous letter V stands for in the Cadillac alphabet and once again they do not disappoint us. Fully revealing their new ATS-V Coupe and ATS-V Sedan at the LA Auto Show, Cadillac entered a whole new niche of small performance sedans dominated by the German luxury brand. Luckily, the all American brand has some assets in its pocket, and according to an official press release, Cadillac used a lot of them building this magnificent machine.

They’ve revealed two versions in LA. One is a nice family saloon and the other is a badass mean two door coupe which looks so aggressive and American you may mistake it with a war machine. Riding on 18-inch Michelin Pilot Super Sport tires, both cars are equipped with state of the art technology such as the Magnetic Ride Control or even the super efficient Brembo brakes. That should be enough for anyone wanting to hit a racetrack in one of these monsters. However, stiffened suspension setup improved with the addition of smart electronic driving aids provides exceptional balance of comfort features and sporty attitude this cars carries with itself.

The buyers will be specially pleased if they opt for the Carbon Fiber or the Track package. Both bring some interesting features such as more prominent front splitter, carbon fiber detailing all over the exterior, as well as new rear diffuser. The Track package additionally decorates the vehicle with a leaner and lighter battery, as well as with a Performance Data Recorder. 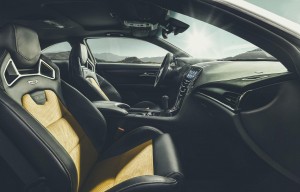 Even though Cadillac did not disclose any official data about these vehicles, we have found out that the fastest ATS-V could hit 60 in less than 4 seconds and reach a maximum speed of more than 185 mph. Considering that the vehicles are powered by a 3,6-liter V6 with 455 HP, these results are rather impressive.

Cadillac released their newest V vehicle. We all know what that famous letter V stands for in the Cadillac alphabet and once again they do not...